Chasing The Dragon has become known as one of the leading producers of audiophile recordings. The specialist UK audiophile label owned by Mike Valentine offers Direct Cut LPs. Audiophile LPs, CDs, and Master Tapes which demonstrate the potential of your Hi-Fi system. 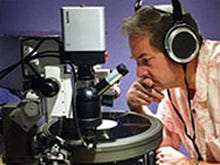 Mike Valentine is an ex-BBC sound engineer and is passionate about high-quality audio recording. If his name sounds familiar, he is also an internationally-renowned underwater cameraman. He has filmed underwater sequences for over 90 films, including 5 James Bond movies. His record label is one of very few that make direct-cut vinyl recordings of classical, jazz and big band music.

"There can be no question that Mike Valentine really knows what he’s doing as he pursues an “everything matters” philosophy that has consistently produced recordings that will impress the most demanding audiophiles. It’s also apparent that the Valentines’ management style in the studio is extraordinarily effective, destined to get the best from both the artists and recording professionals they work with."
- The Absolute Sound