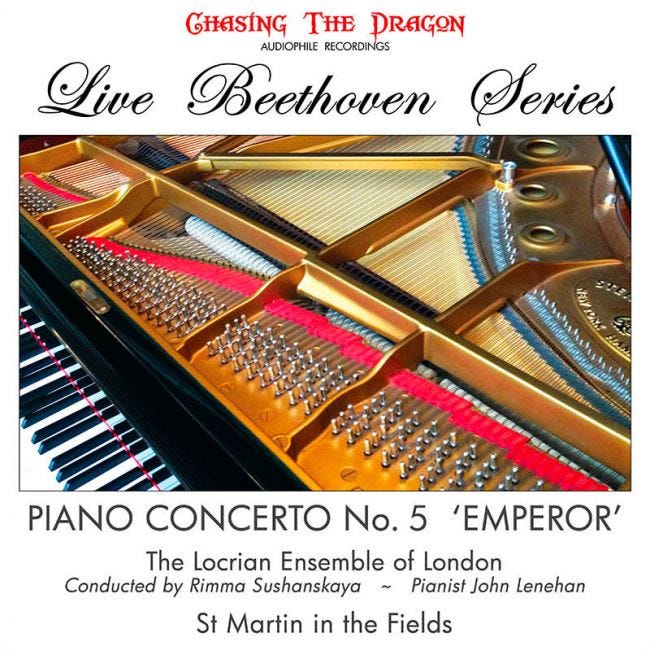 Known as the "Emperor", John Lenehan gives a superb performance with the Locrian Ensemble. It is a live concert recorded at St Martins in the Field. Only four microphones were used to capture the orchestra within this superb acoustical space.

On the 1st of February, Chasing The Dragon had the opportunity of recording a live Beethoven concert performed at St. Martin-in-the-Fields. From this event, they have been able to release 2 new recordings featuring the Locrian Ensemble of London, conducted by Rimma Sushanskaya.

Also recorded on the same day was a Symphony No 5 performance by the Locrian Ensemble of London.

"At Chasing The Dragon, we have started to release a series of Live Beethoven concert recordings. For our second, we present the wonderful pianist John Lenehan in an amazing performance of the Piano Concerto No. 5. John's playing, combined with the Locrian Ensemble of London, was an incredible event. I have recorded it using only 4 microphones, in an effort for you to connect directly with the jump factor we all felt on that very cold February evening!"
- Mike Valentine, Chasing The Dragon

"Beethoven concerts are not as frequently encountered these days as they once were, so it was an attractive 'traditional' programme of overture - concerto - symphony that drew a large audience to London's St. Martin-in-the-Fields, on February the 1st. They were rewarded with a programme of outstanding quality from the finely played Egmont Overture, to the 5th Symphony, by way of the Emperor Piano Concerto, notably well-conducted throughout by Rimma Sushanskaya, most able partnering the very fine John Lenehan who gave an outstanding account of the solo part, supported to the hilt by this very gifted conductor and orchestra. Dr. Sushanskaya's performance of the 5th Symphony was in the memorable class, a reading of deep musicianship and interpretive character. No wonder soloist and conductor were called back time and again after the concerto to be rewarded with a genuine standing ovation at the end, which lasted for many minutes."
- Musical Opinion Quarterly