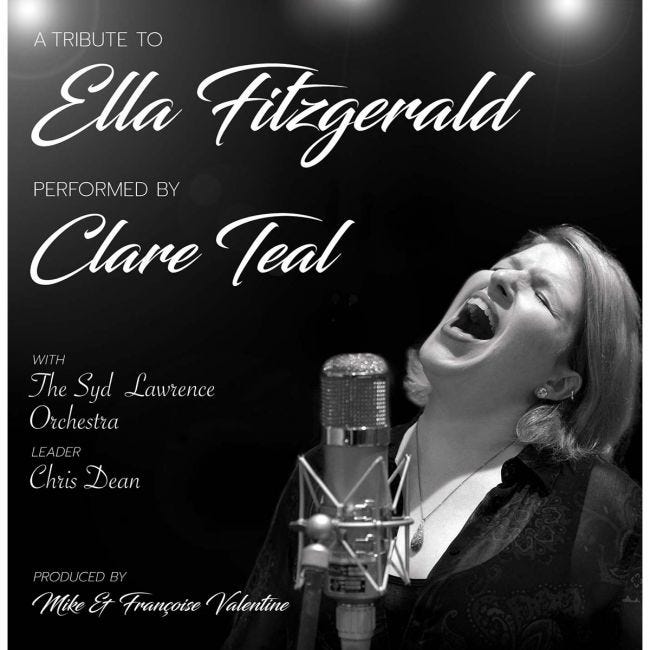 The Syd Lawrence Orchestra accompany Clare Teal in a homage to the wonderful Ella Fitzgerald. This is a "Direct Cut" live recording and the sheer jump factor has to be heard to be believed!

Talented singer Clare Teal performs A Tribute To Ella Fitzgerald with The Syd Lawrence Orchestra led by Chris Dean. Cut direct to lacquer for optimum sound quality. Recorded June 28, 2016, at Air Studios, London. Standards like 'I've Got You Under My Skin', 'I Get A Kick Out Of You' and 'Anything Goes' all rehearsed, mixed and live cut, in one day!

"I was looking for a "you are there" balance. Have we achieved it? Well, I loved the shuffling sound of the band turning the pages of the score and if you listen carefully, you can almost hear Chris the leader, counting everyone in...And the overall sound quality? Well, I think our new album has the "jump factor", but this time I hope that you will feel that Clare is standing right in the centre of the speakers and if there was a knob on the desk, which was marked foot-tapping, I have this time been able to turn it all the way up to ten."
- Mike Valentine, Chasing The Dragon

4. Ding Dong The Witch Is Dead

"No left turns here, no postmodern reappraisals -- just straight-ahead swing...And the sequencing is superb. Side A kicks off with three softly swinging numbers, and then, on "Ding Dong the Witch is Dead", the orchestra raises the energy level a notch or three -- enough to make one very curious about Side B, where, indeed, the music roars that much more, climaxing with "Too Darn Hot", where Teal and the orchestra peak at the same time, yet sonics remain clean, with nice-sounding highs."
- The Absolute Sound

"Being a Direct Cut Disc, this meant that performing would need to be done all in one go without any post-editing. In my career, I have often found that musicians, narrators and actors perform better knowing that it is "as live"; often the 'security' of having the facility to edit any mistakes at a late date prompts hap-hazard performances…Being a live recording, with no stops between tracks, any rustling of pages or noises from trumpet and trombone mutes being picked up for quieter sections, or even vocal injections from the leader, Chris Dean, only add to the "liveliness" of the album."
- Hifi Pig Magazine

"Teal, for all intents and purposes, sounds like a 1940's era singer transported to 2016, not just in her phrasing but particularly her vocal timbre. I can think of no other female vocalist today who hits this particular nostalgic mark and does so without it sounding forced or archaic. Instead, it sounds refreshing and generous.
Everyone's ears perked up when I played this at RMAF. The playing is crisp (under the direction of Chris Dean), the arrangements are dynamic with nicely placed hard-driving kick drum accents, and Clare sounds, for all intents and purposes, like the fourth Andrews Sister. We should be grateful that someone is taking the time and spending the money to produce a direct to disk record but more grateful that the music lives up to the sonic promise."
- Analog Planet