What is HDMI Pass-Through?

HDMI pass-through is a function which is pretty handy but many people are unaware what it really does. HDMI pass-through passes a video and audio signal from an HD source such as a Blu-ray player or an HD set top box to your home theatre system via an HDMI cable. The home theatre plays the audio from the HD source through its own speakers and sends just the unaltered video signal to a TV through a second HDMI cable.

Sometimes you want the signal from a source device to travel through an intermediary device without alteration, so when a home theatre device is described as having pass-through capability, it means that the audio or video can exit exactly as it entered.

A Home Theatre System that supports HDMI pass-through will have one HDMI OUT port and at least one HDMI IN port, one to receive an HDMI signal (IN) from the connected external device, and the other to send the HDMI signal to a TV (OUT).

It provides an easy, single cable method of sending HD audio formats from an HD source to a home theatre passing the digital, 1080p video signal from your Blu-ray player or set top box to your TV without altering the signal.

Without using an HDMI cable, the only alternative method requires you to connect eight audio cables. The HD audio formats are sent in digital form. The eight audio cable connection method will only transmit analogue signals.

“Standby pass-through” is another HDMI feature that enables the receiver to continue to pass audio and video signals over HDMI, even when the receiver is in standby (off) mode. This flexibility is nice for times when you may not want to fire up your full surround sound system, but still want to access your home theatre gadgets and use your TV's built-in speakers. Standby pass-through isn't available on every device, so you'll need to check the manufacturer's specifications.

Below is a diagram of an HDMI pass-through connection: 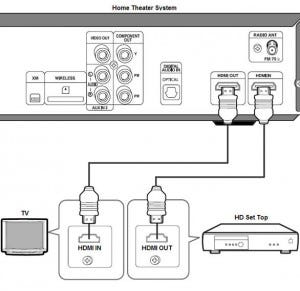 Knowing about HDMI pass-through may help you make better decisions next time you are looking to purchase a new device in your Home Theatre ensemble. Eventually this function will be standard, but until then check the specs before investing.