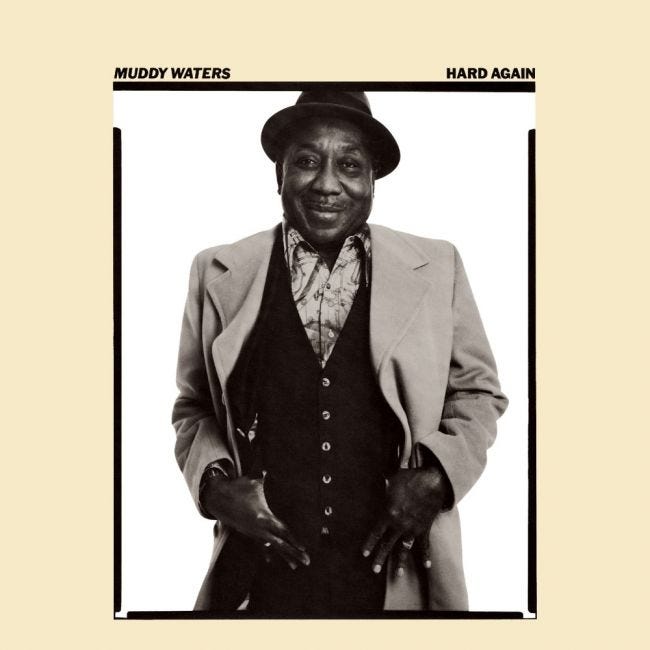 The Chicago-based blues singer Muddy Waters has been in the business since the 1940s, influencing the 60s blues-rock movement spearheaded by the Rolling Stones. Recorded eight years after his last album After The Rain, Hard Again is Muddy Water's massive comeback album of 1977, opening up with the one song that cemented Muddy's place in Rock & Roll heaven: "Mannish Boy". Produced by Johnny Winter (whose ecstatic 'Yeah!'s can be heard on "Mannish Boy"), Hard Again features Muddy's trademark blues sound: rugged, raw and full of energy. The rest of the album has similar qualities: blues harps, slide guitars and wailing vocals, it's all there. Music On Vinyl's 180-gram reissue is a no brainer for any record collection!

Originally released January 10th, 1977, Hard Again was the first of three masterful collaborations with Johnny Winter. The album marked a major resurgence for Muddy Waters, who had hung in with the failing Chess Records until it's 1975 demise.

Hard Again is a desert island blues album, featuring a magical only-once-ever lineup of Muddy Waters as the blues singer, a position he preferred, Johnny Winter and Bob Margolin on guitar, Pinetop Perkins on piano, Willie "Big Eyes" Smith playing drums, James Cotton on harmonica, and Charles Calmese on bass. Muddy plays gripping renditions of several former hits that overshadow past recordings. Commentary like "The Blues Had A Baby and they Named It Rock n Roll" cemented his status as a living link between the blues and rock. Hard Again won a Grammy in 1977.

After a string of mediocre albums throughout most of the 1970s, Muddy Waters hooked up with Johnny Winter for 1977's Hard Again, a startling comeback and a gritty demonstration of the master's powers. Fronting a band that includes such luminaries as James Cotton and "Pine Top" Perkins, Waters is not only at the top of his game, but is having the time of his life while he's at it. The bits of studio chatter that close "Mannish Boy" and open "Bus Driver" show him to be relaxed and obviously excited about the proceedings. Part of this has to be because the record sounds so good.

"Winter has gone for an extremely bare production style, clearly aiming to capture Waters in conversation with a band in what sounds like a single studio room. This means that sometimes the songs threaten to explode in chaos as two or three musicians begin soloing simultaneously. Such messiness is actually perfect in keeping with the raw nature of this music; you simply couldn't have it any other way. There is something so incredibly gratifying about hearing Waters shout out for different soloists, about the band missing hits or messing with the tempos. Hey this isn't pop music, it's the blues, and a little dirt never hurt anybody. The unsung star of this session is drummer Willie "Big Eyes" Smith, whose deep grooves make this record come alive. The five-minute, one-chord "Mannish Boy" wouldn't be nearly as compelling as it is if it weren't for Smith's colossal pocket. Great blues from one of the dominant voices of the genre."
- Daniel Gioffre, AllMusic