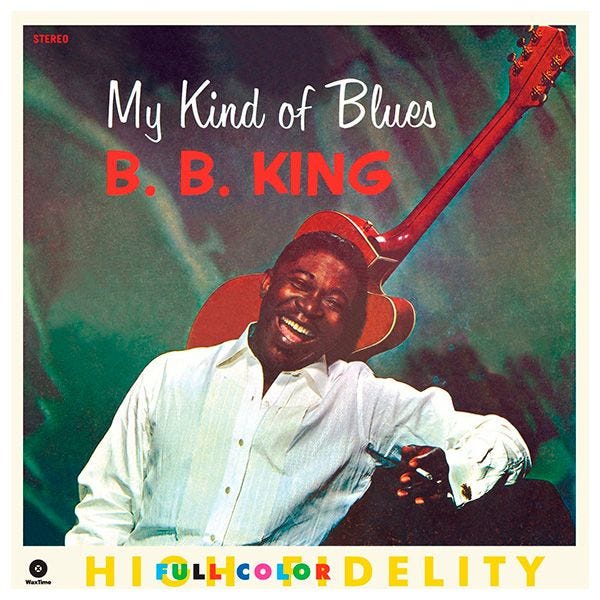 My Kind Of Blues is an album by B.B. King, re-released in 2014 on 180g vinyl. Includes the following tracks: “You Done Lost Your Good Thing Now”, “Understand”, “Catfish Blues”, “Hold That Train” and more. This high-quality blues LP features bonus tracks and a download code.

A1: You Done Lost Your Good Thing Now
A2: Mr. Pawn Broker
A3: Understand
A4: Someday Baby
A5: Driving Wheel
A6: The Fool*

This quintessential collector’s edition includes B.B. King’s sensational album, My Kind of Blues, originally issued by the Crown label in August 1960 and long unavailable on vinyl. King himself has called it his favourite album and it’s easy to see why.

Recorded around March 1960 using only the accompaniment of Lloyd Glenn (piano), probably Ralph Hamilton (bass) and Jessie Sailes (drums), King’s stinging guitar and powerful voice come across beautifully. There’s a relaxed, almost after-hours feel to the proceedings emphasized by Glenn’s delicate piano work. Many of the songs are blues standards that have been covered by others, but in B.B.’s hands, they sound like true blues songs and it shows in his graceful and elegant performances. This may be the purest expression of King’s music, as exemplified on “Catfish Blues,” which is so dynamic it’s perhaps the definitive version of this standard.

There’s a fine balance between the classic B.B. cuts of “You Done Lost Your Good Thing Now” and “It’s My Own Fault, Darlin’,” letting us know what’s always been part of King’s blues message – that a relationship is a mutual responsibility. “Mr. Pawnbroker” describes marital blues from a pawnbroker’s perspective. The best thing about all the songs is that they feature King’s voice and guitar in their most essential form: upfront, sharp and strong, in a spare, blue setting.

In addition to the original masterpiece, this WaxTime collector’s edition includes 2 bonus tracks: the great “I’ll Survive” (which was recorded during the My Kind of Blues sessions, but finally not included on the LP) and “The Fool” (recorded in Los Angeles, 1959).

B.B. KING, vocals and guitar, plus: