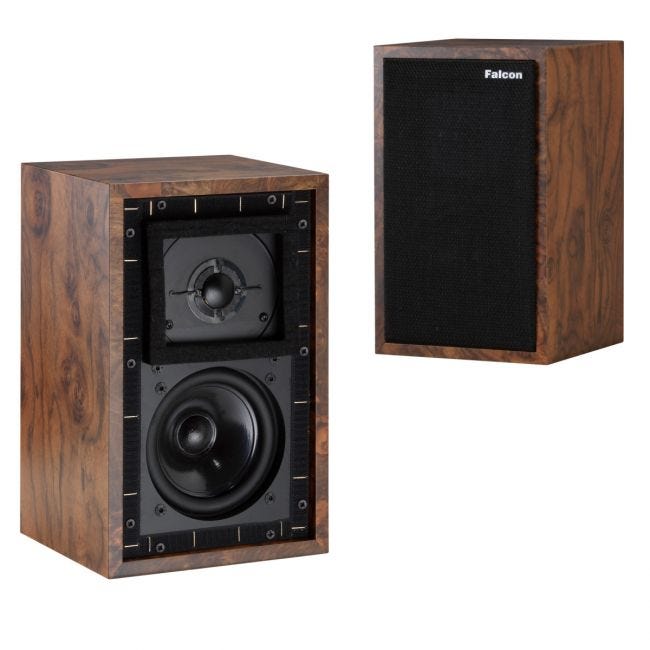 The Falcon Acoustics Classic 15 ohm LS3/5a Gold Badge, fully Licenced by the BBC, and hand-assembled by Falcon in Oxford England. It is the only LS3/5a in production that faithfully replicates the original BBC design published in October 1976.

The Falcon Acoustics Classic 15 ohm LS3/5a, fully Licenced by the BBC, and hand-assembled by Falcon in Oxford England. It is the only LS3/5a in production that faithfully replicates the original BBC design published in October 1976.

The result of nearly 2 years development, the Falcon LS3/5a is a true British-made classic 15 ohm LS3/5a. It continues the long tradition of the genuine British BBC-Licenced LS3/5a stretching back to the 1960’s.

"The new Gold Badge Falcons ... presented music in a conspicuously grainless and unabashedly liquid manner. The first thing I noticed was how music flowed extra-easily and extra-quietly out of the Gold Badge boxes. The sound seemed more relaxed and less restrained than the classic version."

Read the full review by Herb Reichert at stereophile.com

"The latest Gold Badge upgrade has made the Falcon Acoustics LS3/5a even more desirable, it delivers more detail, has the tightest bass of all and betters many more expensive systems on midrange. Over 45 years since the 1972/1974 BBC prototypes this iconic little loudspeaker has lost none of its charm, which is why it is one of the most sought after classics today."

Read the full review by René van Es at the-ear.net

Gold Badge crossovers are just the cherry on top of Falcon's already world-renowned LS3/5a speakers. With their legendary true-to-spec B110 drivers and T27 tweeters, it's no wonder why some reviewers are saying they "might be the best LS3/5a ever produced for general consumption."

The cabinets are hand made from specially selected graded Baltic Ply, and use selected grade Beech fillets. They are British made to BBC Specification, and are available in a variety of natural wood veneers (see below for pictures of current veneers) with a Tygan Cloth front grille. 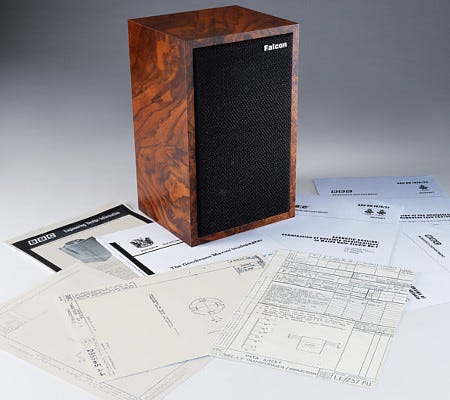 In the late 1960s, The BBC's Research Department at Kingswood Warren set out to develop a speaker to emulate the acoustics of their legendary Madia Vale Studios. They needed something small that sounded accurate and open while still going down to 70hz.

After extensive research, the fully imagined BBC LS3/5a emerged, and only about 20 units were produced. The original monitors employed The KEF B110 midrange driver and KEF T27 tweeters designed by non-other than Falcon's own Malcolm Jones.

Shortly after the success of their first speaker, the BBC Design Department was tasked with creating a small commercial-made speaker. The result was the now-famous BBC LS3/5a. Produced in small batches to maintain quality control with outside suppliers, the LS3/5a title is closely guarded to keep authenticity. Any speaker claiming to be an LS3/5a must follow the BBC's precise design and sonic specifications to be licensed and considered an actual BBC LS3/5a monitor. 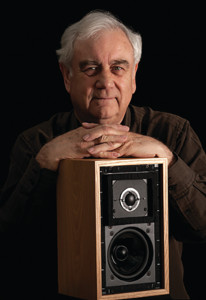 Falcon Electronics was founded in 1972 as by the first employee at KEF Electronics Ltd., Malcolm Jones. As KEF's Senior Development Engineer, Malcolm was responsible for most of the design and development of the legendary KEF drive units - the B139, B200, B110, T15, T27, and the speaker systems in which they were incorporated. After 13 years of success with some of the world's most fabled speaker designs, he left KEF in 1974 to work full time at what would then become Falcon Acoustics Ltd.

Write Your Own Review
5 Years
This matched pair of Falcon speakers comes with an individually numbered certificate of authenticity as well as a full 5-year guarantee on workmanship, parts, and labour.