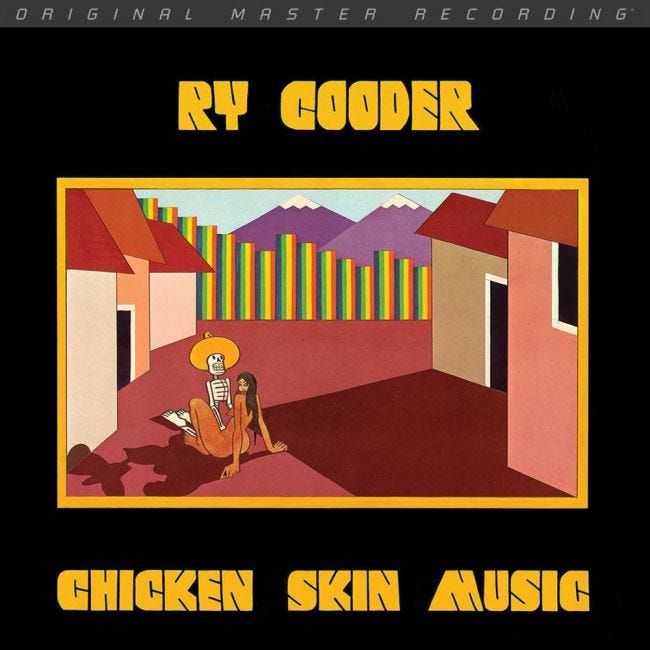 B1: Smack Dab In The Middle
B2: Stand By Me
B3: Yellow Roses
B4: Chloe
B5: Goodnight Irene

The title of Ry Cooder's Chicken Skin Music - Hawaiian slang for goosebumps - serves as a direct, simple description of the album's emotional appeal. But it barely scratches the surface of a 1976 effort that triggered an interest in "world music" a decade before the term became commonplace and a genre into and of itself. Part of a series of inimitable mid-1970s records on which Cooder ignored traditional boundaries and instigated lasting cross-cultural communication, Chicken Skin Music blends gospel, Hawaiian, folk, blues, and Tex-Mex styles into a brilliant roots stew distinguished with virtuosic playing and inspired contextual surprises.

Mastered from the original master tapes, pressed at RTI, and strictly limited to 3000 numbered copies, Mobile Fidelity's 180g vinyl LP of Chicken Skin Music brings the brilliant instrumental textures and lively tonalities to the fore like no prior analog edition. Graced with silent, black backgrounds and generous soundstages, this reissue particularly underscores the depth of Flaco Jimenez's accordion contributions. You'll hear the air flowing through the reeds, pressure resonating from the bellows, and the wide-spanning timbres emanating from the register stops.

Equally transfixing are the lifelike manners in which the rich assortment of guitars come alive, with each note occupying its own space and portraying a character unique to the individual instrument, be it a slack-key, steel, or acoustic guitar. The result is a multi-detailed, organic-sounding musical tapestry that dazzles by way of beautiful interplay, unexpected dialogue, and connective eclecticism that proves music is indeed a common language when executed with a collaborative mindset, innovative exploration, and respectful authenticity - no easy feats, but achievements fully on display on Chicken Skin Music.

Jimenez, now a legend that's performed with everyone from the Rolling Stones to Dr. John, remains one of the keys to Cooder being able to successfully carry out what the latter deemed a "mutuality in music" vision. Cooder first heard conjunto accordion fare on a Mexican radio station in his car and proceeded to teach himself the instrument while committing himself to embracing the then-local, regionalized style for the set that became Chicken Skin Music. Jimenez graces three tracks, including a ravishing interpretation of Ben E. King's "Stand by Me" transformed into a spiritual grounded by a norteno structure and a romantic take on Jim Reeves' "He'll Have to Go" recast with a bolero rhythm and saxophone-accordion duet.

Chicken Skin Music isn't limited to South of the Border geography and tradition. Steel-guitarist and vocalist Gabby Pahinui and slack-key guitar great Atta Isaacs represent the 50th state on stripped-down renditions of Hank Snow's smash "Yellow Roses" and the wordless "Chloe." Elsewhere, gospel singers team with Cooder on the Appalachian-tinted "Always Lift Them Up," the midsection of which features the Hawaiian standard "Kanaka Wai Wai."

Cooder bookends everything with a pair of Leadbelly numbers - "The Bourgeois Blues" and "Goodnight Irene" - chosen after the headliner witnessed Jimenez and his band perform at a local dance. Given their ordering on the album, techniques they employ, and themes, the songs also further tighten the thematic connection the headliner makes with the standout guests. In many ways, Chicken Skin Music is the equivalent of Buena Vista Social Club more than 20 years before the latter emerged. Experience it the way Cooder and company meant it to be heard - in unparalleled fidelity.