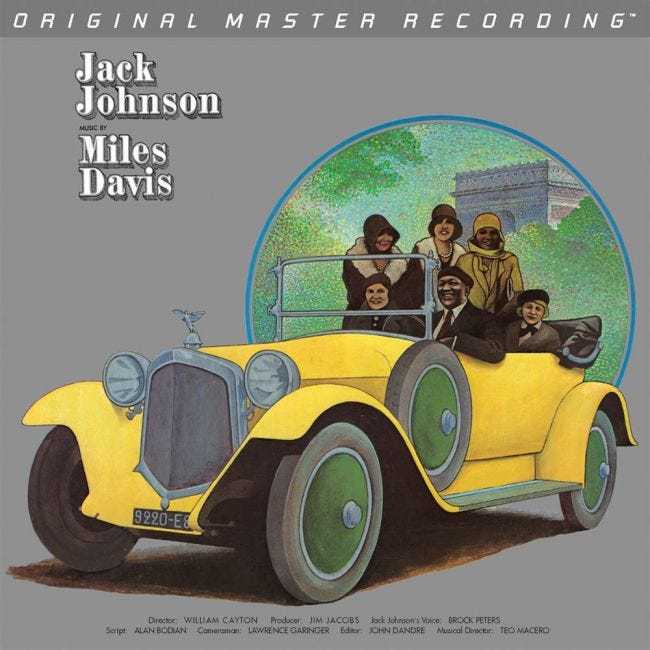 Miles Davis' A Tribute to Jack Johnson is the best jazz-rock record ever made. Equally inspired by the leader's desire to assemble the "greatest rock and roll band you have ever heard" as well as his adoration of Johnson, Davis created a hard-hitting set that spills over with excitement, intensity, majesty, and power. Bridging the electric fusion he'd pursued on earlier efforts with a funkier, dirtier rhythmic approach, Davis zeroes in on concepts of spontaneity, freedom, and identity seldom achieved in the studio. Mobile Fidelity's sterling reissue brings it all to fore with unsurpassed realism.

Indeed, utilising wah-wah and distortion, guitarist John McLaughlin comes on here with a nasty edge, slashing style, and vicious streak that allows A Tribute to Jack Johnson finally cross the divide between rock and jazz. Davis puts both feet in the former camp and permanently erasing any gap. In addition to highlighting McLaughlin's ripping performances, Mobile Fidelity's 180g LP showcases the headliner's white-hot trumpet solos like never before. Bristling with exuberance, Davis' high-register passages explode with authority and commanding presence. Around him, a barrage of urgent backbeats, knifing riffs, and three-dimensional bass lines emerge amidst an ink-black background.

The least-well known true masterpiece of Davis' career, the 1971 record - like Bitches Brew, seamlessly assembled from sessions by producer Ted Macero - was a victim of scant promotion. But to those that heard it, among them critic/musician Robert Quine and renowned writer Robert Christgau, A Tribute to Jack Johnson surpasses everything that came before. Davis treated it as a personal manifesto: An opportunity to salute the championship boxer admired for his threatening image to the establishment and taste in clothes, cars, women and music. Davis explains in the liner notes his affinity for Johnson - a stance revealed in the music, which simultaneously hits with a prize fighter's brutal force and reflects the graceful elegance with which a pugilist navigates the ring.

Producer and journalist Michael Cuscuna may have summed up the record's significance in 2003: "The dense textures introduced and developed the prior fall on the Bitches Brew recording sessions gave way to a lean, stripped-down, guitar-heavy sound. There was now only one drummer, and that kept the groove more pronounced and defined. The three-keyboard configuration appears only on the last session; the rest have none, one, or two, and they are used sparingly."