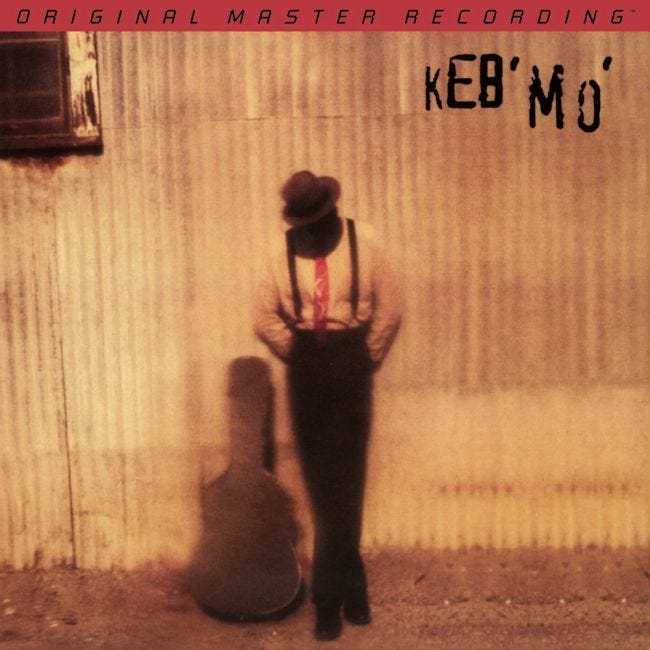 A1: Every Morning
A2: Tell Everybody I Know
A3: Love Blues
A4: Victims of Comfort
A5: Angelina
A6: Anybody Seen My Girl?
A7: She Just Wants to Dance

In an age where most contemporary bluesmen strive to mimic the past and pattern their music after the greats, Keb' Mo' is content to be himself. Original, charismatic, and immensely gifted, the guitarist/vocalist (born Kevin Moore) brings country blues in the late 20th century on his stunning self-titled Epic debut, which quickly climbed the charts and turned the former backing instrumentalist into a household name. Replete with gritty textures, close-up vocals, and resplendent acoustics, Mobile Fidelity's scintillating analogue version of this 1994 set finally possesses the fidelity that brings Mo's Delta strains out of the backwoods and onto a lively back porch.

Half-speed mastered from the original tapes, this numbered edition 180g LP represents the very first time that Mo's watershed album has been given a much-needed sonic facelift. Gone are the hazes that obscured his singing, artificial ceilings that blunted the highs, and digital fog that interfered with the multitude of illuminating tones, details, and notes. What's revealed is startling intimacy and soothing emotion, Mo's gorgeous vocal timbres and inflections given equal space with his guitar, harmonica, and pace. Finally, a great-sounding contemporary blues record that doesn't resort to derivative recycling and bland revivalism.

The son of Southern parents, Mo' channels his heritage via a batch of superb folksy songs that relax, refresh, and regale. While he's since travelled in a more commercialised pop-oriented direction, Mo's initial salvo is nothing but raw, pure blues played with unbridled passion, tremendous conviction, and what is best deemed the essence of heart and soul. Keb' Mo' engages with a compelling mix of tradition and modernity, the headliner refraining from any attempt at assuming an artificial personality and instead basing his reputation on quality songs. As such, Mo's material resonates with deep, mellow vibes and extraordinary National steel guitar work, which complements his fluid, acoustic finger-picking and soulful strumming.

Mo' occasionally teams with an ensemble. But this record is mostly all about the basics: guitar, voice, and harmonica. Tunes such as "Victims of Comfort" and "Angelina" testify on behalf of his phenomenal country-blues songwriting; his covers of Robert Johnson's "Come On In My Kitchen" and "Kindhearted Woman Blues" speak to his reverence for the past. Shuffles, ballads, dance songs - Mo nails them all.