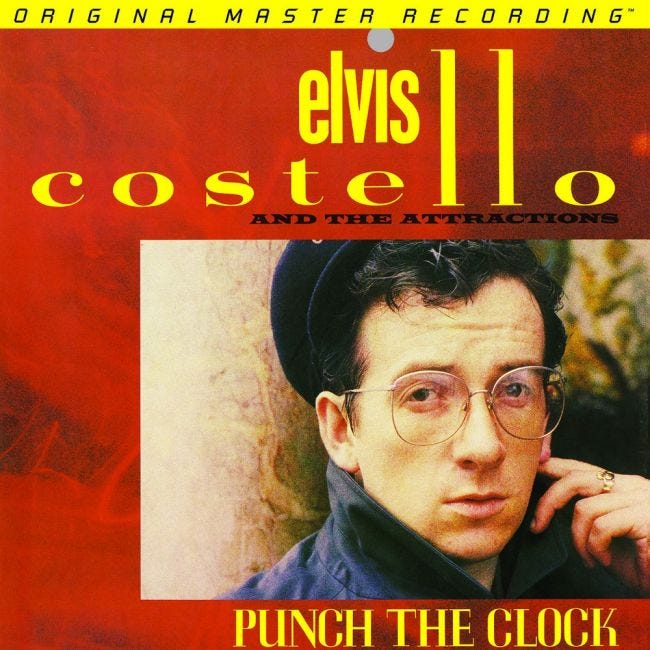 A1: Let Them All Talk
A2: Everyday I Write The Book
A3: The Greatest Thing
A4: The Element Within Her
A5: Love Went Mad
A6: Shipbuilding

B1: TKO (Boxing Day)
B2: Charm School
B3: The Invisible Man
B4: Mouth Almighty
B5: King Of Thieves
B6: Pills And Soap
B7: The World And His Wife

Punch the Clock is Elvis Costello & the Attractions' most British record, a return to mainstream pop craft loaded with clever barbs and insightful social commentary that nearly landed the headliner in serious trouble with government representatives. Produced by the English hit-making team of Clive Langer and Alan Winstanley, the jumpy and horn-accompanied 1983 effort includes Costello's first-ever American Top 40 hit ("Everyday I Write the Book") and a smooth sheen that reinforces the material's commercial intent and catchy appeal.

Fresh from making a country tribute album and a large-scale set flush with complex arrangements, Costello and Co. return to straight-ahead pop given a decidedly British accent and soulful backing vocals. Conscious of the Merseybeat sound and success of Dexy's Midnight Runners, Costello tints songs with new-wave characteristics, splashy horns, and spontaneous vocal-response support courtesy of female duo Afrodiziak, one member of which later attained fame with Soul II Soul. Steve Nieve's bounding piano lines dance throughout the arrangements, adding witty pizzazz and delicate allure to already-tuneful fare like "The Element Within Her" and "Mouth Almighty."