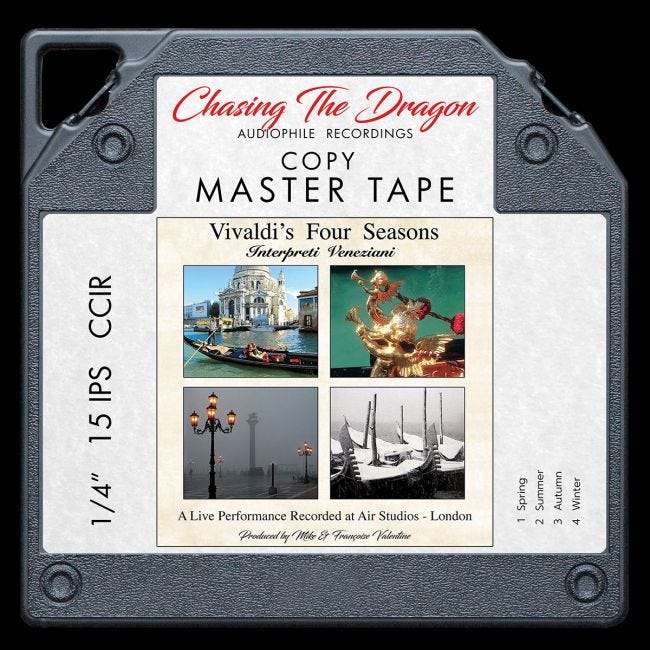 One of the most well-loved pieces of classical music. Chasing The Dragon's Reel to Reel release of Vivaldi's 4 Seasons was recorded "Live" direct to disc, with no editing, by the leading Venetian chamber orchestra, Interpreti Veneziani.

A dynamic performance, a pure analog delight! Vivaldi's best-known work, The Four Seasons, is given new life in this Audiophile Direct to Disc recording from Chasing the Dragon. In order to make this D2D recording, the Interpreti Veneziani Chamber Orchestra performs each album side live in the studio, recorded via state of the art, all-tube valve microphones, fed to a Neve Desk, and then via a pure analogue path directly to the Neumann VMS80 lathe.

The brilliantly captured session was carefully engineered, and mixed live, no overdubs! During the performance, the Neumann VMS 80 Cutting head engages the master lacquer ("stamper" used for pressing LPs) and is not stopped until the entire side is complete! The results are amazing! A more accurate recording, a greater immediacy and interaction among the players, less background noise through the elimination of master tapes, overdubs, etc. by directly cutting the recording to vinyl. A dynamic album that needs to be heard!

"In creating this direct cut album, we had to overcome many challenges. Because the album had to be recorded 'live' I had to first find a piece of music which would the perfect length. Obviously, I found the answer in Vivaldi's Four Seasons. Next came the musicians and I was so lucky to have the opportunity of bringing over from Venice, the leading Venetian chamber orchestra, Interpreti Veneziani. Finally, I had to find a recording studio which not only had a superb space, it also had to have an engineer versed in the black art of cutting live vinyl. Well, have we succeeded? Please judge for yourself, for I hope you have as much fun in listening as we had in cutting this disc!"