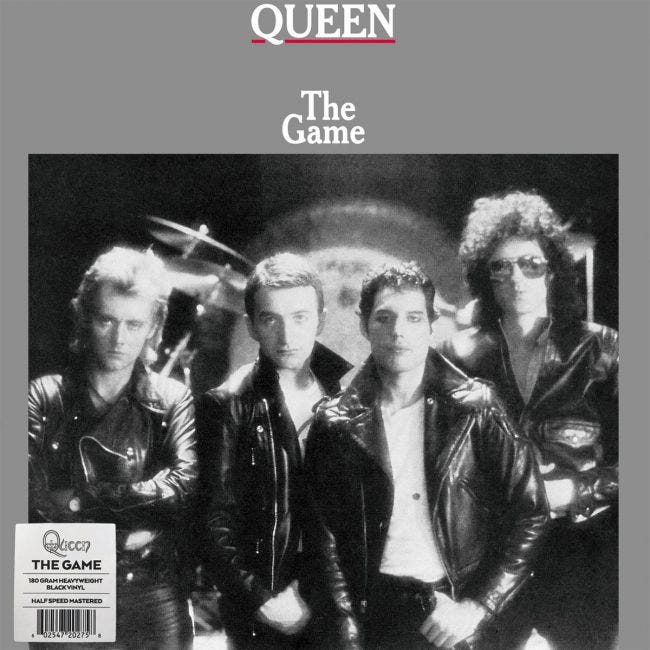 This record was cut using a specialist technique known as half-speed mastering. This artisan process results in cuts that have a superior high-frequency response (treble) and very solid, stable stereo imaging. In short, a very high-quality master that helps to create a very high-quality record.

A1: Play The Game
A2: Dragon Attack
A3: Another One Bites The Dust
A4: Need Your Loving Tonight
A5: Crazy Little Thing Called Love

The majority of Queen's eighth studio album was recorded between February and May 1980. The tracks, Save Me, Coming Soon, Sail Away Sweet Sister and Crazy Little Thing Called Love (the first single from the album, released a full seven months ahead of The Game) were recorded in June and July of 1979. Despite the fact that Queen had recently purchased their own recording studios in Montreux, Switzerland, they did not use it for this project. All tracks were recorded in Musicland in Munich and were produced by Queen and Mack. It was the first Queen/Mack co-venture but certainly not the last; the collaboration would go on to produce some of the band's finest work and be responsible for many of the biggest and best known hits.

“We were No.1 in all the Soul, Black orientated charts, Disco charts...it was totally unexpected...we never even thought of that record as being a single...”
- Roger Taylor on Another One Bites The Dust

The Game marked a notable turning point for Queen in terms of musical style. For the first time they were experimenting with disco/funk rhythms and completely immersing themselves in the bass-driven grooves of the day. Whatever Queen did, and whatever the fall-out might be, good or bad, they embraced it wholeheartedly, and this album was no exception. The Game was the first Queen album to feature a synthesizer, though this aspect was unwelcome news to many long term fans who had been with Queen since the 'Nobody played synths' albums of the seventies. John in particular is known to enjoy soulful upbeat Motown and disco/dance music, and was the person most at ease with this significant change in direction. From these sessions came the mighty Another One Bites The Dust, a colossal international hit that gave John his first No 1 record. Inspired by the kind of bass lines so successfully employed by soul group Chic at that time, Bites The Dust came from nowhere to catapult Queen into the stratosphere and a whole new audience – even in the most unlikely quarters as the black funk clubs of New York.

For many fans, The Game’s radically alternative feel was a change too far. While many new listeners were attracted to Queen for the first time, some of the long-term supporters regarded this foray into disco as the band selling out. No matter, when released on June 30th 1980 in the UK, The Game entered the charts at No 1. Later it would become Queen's first No 1 album in the U.S.

Singles from this album: Crazy Little Thing Called Love / Save Me / Play The Game / Another One Bites The Dust / Need Your Loving Tonight.