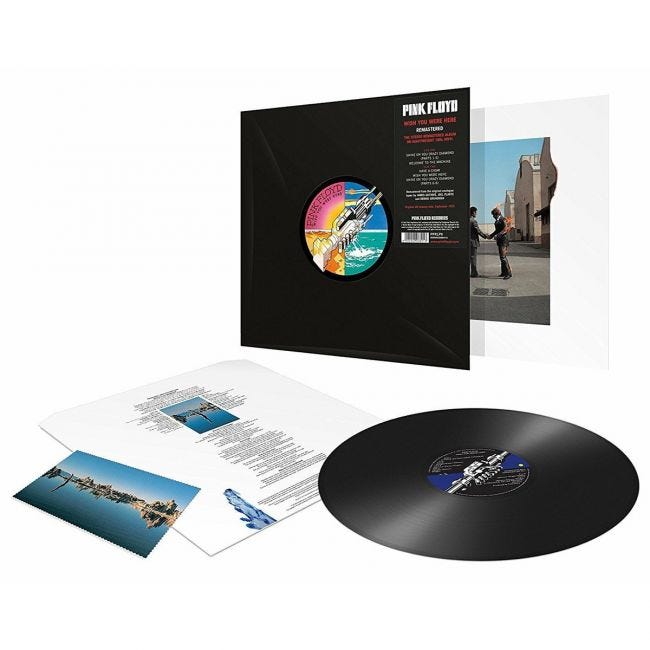 Presented here is a high-quality 2016 remastered release of Wish You Were Here by Pink Floyd. Includes the following tracks: “Shine On You Crazy Diamond Parts 1-5”, “Welcome To The Machine”, “Have A Cigar”, “Wish You Were Here” and more.

A1: Shine On You Crazy Diamond (Parts I-V)
A2: Welcome to the Machine

B1: Have a Cigar
B2: Wish You Were Here
B3: Shine On You Crazy Diamond (Parts VI-IX)

Reissue of the ninth studio album by English rock band, Pink Floyd. Originally released in 1976, the title track is definitely one of their most recognized songs and the album is considered by fans and many critics as Pink Floyd's 'magnum opus'.

Comes with printed inner sleeve, postcard and download code card. The album is concealed in black shrink-wrap (making the front cover art "absent"). On the front of the shrinkwrap is a George Hardie designed sticker depicting two mechanical hands engaged in a handshake.

On its release in 1975 Wish You Were Here topped the album charts in both the UK and the US. Reflecting the band's thoughts of the time on the music business, and exploring themes of absence, Wish You Were Here contains the classic cut Shine On You Crazy Diamond, a tribute to founder member Syd Barrett.

The album's themes include criticism of the music business, alienation, and a tribute to founding member Syd Barrett, who left seven years earlier with deteriorating mental health. Like their previous record, The Dark Side of the Moon (1973), Pink Floyd used studio effects and synthesisers. Guest singers included Roy Harper, who provided the lead vocals on "Have a Cigar", and Venetta Fields, who added backing vocals to "Shine On You Crazy Diamond".