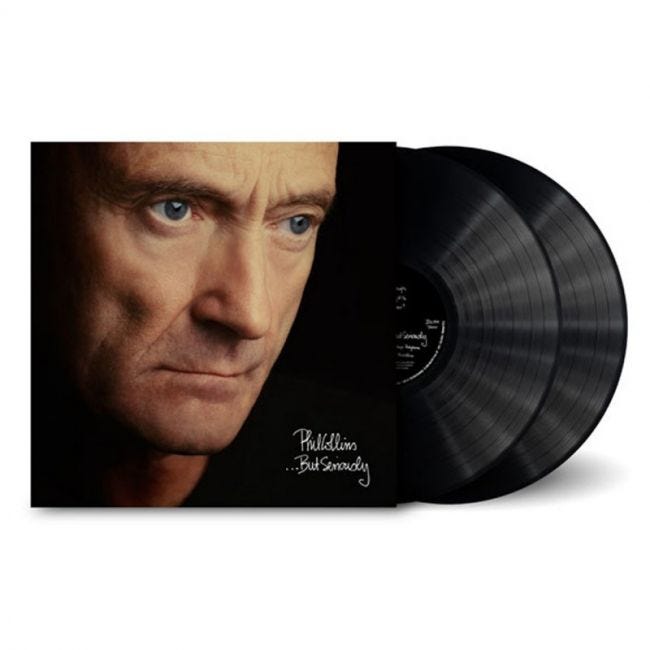 This vinyl release of But Seriously by Phil Collins, released in 2016 includes the following tracks: “Hang In Long Enough”, “Do You Remember?”, “All Of My Life”, “Saturday Night And Sunday Morning” and more.

B1: Something Happened On The Way To Heaven
B2: Colours
B3: I Wish It Would Rain Down

C1: Another Day In Paradise
C2: Heat On The Street
C3: All Of My Life

Remastered on 180g Vinyl, ‘…But Seriously’ features many of Phil Collins’ biggest hits and was one of its era’s biggest selling albums.

Phil Collins revisits a career that can boast over 100 million sales and numerous worldwide #1 albums. Both discs have been remastered by Nick Davis, who earned a Grammy nomination for Best Surround Sound album for his work on the Genesis '1970-1975' box set. Davis has also worked on all of the Genesis retrospective reissues.

Entirely curated and compiled by Collins himself, his idea for this release is to examine how his songs have evolved over time, with the majority of the additional content throughout these releases focused on live versions of the tracks. By contrasting the original studio versions of the material with later performances, the series demonstrates how Collins' songs take on a life of their own once they're freed from the confines of the studio.

Originally released in December 1989, '...But Seriously' features many of Collins' biggest hits and was one of its era's biggest selling albums. In the UK, it spent a total of 15 weeks at #1 during an extended run of almost a year in the Top 10 en route to becoming the biggest selling album of 1990. The album campaign culminated with his fourth and fifth BRIT Awards for British Single ('Another Day in Paradise') and British Male.

The 180-gram heavyweight audiophile vinyl format features the 2016 remastered album as well as the recreated version of the sleeve.