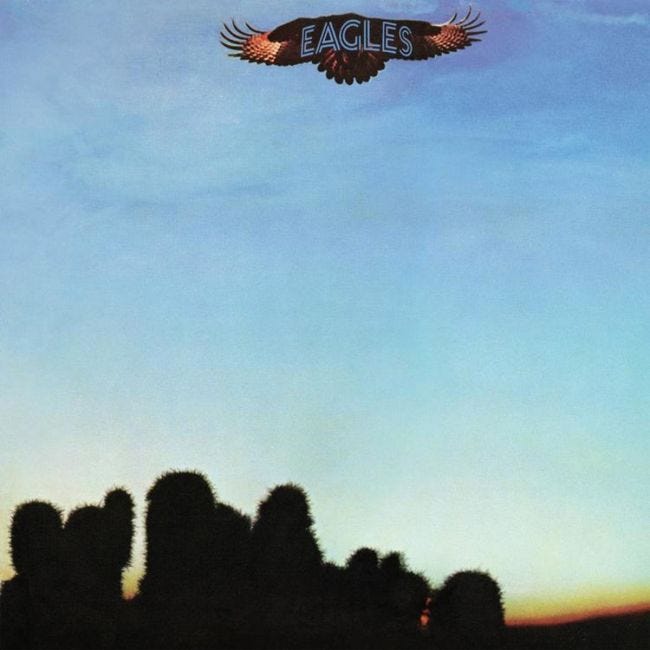 B1: Train Leaves Here This Morning
B2: Take The Devil
B3: Earlybird
B4: Peaceful Easy Feeling
B5: Tryin'

This 2014 reissue LP is pressed on 180-gram vinyl and replicates the original album packaging. The LP cover opens into 49" x 49" poster.

"Balance is the key element of the Eagles' self-titled debut album, a collection that contains elements of rock & roll, folk, and country, overlaid by vocal harmonies alternately suggestive of doo wop, the Beach Boys, and the Everly Brothers. If the group kicks up its heels on rockers like "Chug All Night," "Nightingale," and "Tryin'," it is equally convincing on ballads like "Most of Us Are Sad" and "Train Leaves Here This Morning." The album is also balanced among its members, who trade off on lead vocal chores and divide the songwriting such that Glenn Frey, Bernie Leadon, and Randy Meisner all get three writing or co-writing credits. (Fourth member Don Henley, with only one co-writing credit and two lead vocals, falls a little behind, while Jackson Browne, Gene Clark, and Jack Tempchin also figure in the writing credits.) The album's overall balance is worth keeping in mind because it produced three Top 40 hit singles (all of which turned up on the massively popular Eagles: Their Greatest Hits 1971-1975) that do not reflect that balance. "Take It Easy" and "Peaceful Easy Feeling" are similar-sounding mid-tempo folk-rock tunes sung by Frey that express the same sort of laid-back philosophy, as indicated by the word "easy" in both titles, while "Witchy Woman," a Henley vocal and co-composition, initiates the band's career-long examination of supernaturally evil females. These are the songs one remembers from Eagles, and they look forward to the eventual dominance of the band by Frey and Henley. But the complete album from which they come belongs as much to Leadon's country-steeped playing and singing and to Meisner's melodic rock & roll feel, which, on the release date, made it seem a more varied and consistent effort than it did later, when the singles had become overly familiar."
- William Ruhlmann, Rovi

Eagles is the debut studio album by the rock band the Eagles. The album was recorded at London's Olympic Studios with producer Glyn Johns and released in 1972. The album was an immediate success for the young band, reaching No. 22 on the charts and going platinum. Three singles were released from the album, each reaching the Top 40: "Take It Easy" (number 12), "Witchy Woman" (number 9), and "Peaceful Easy Feeling" (number 22). The band, starting with this album, played a major role in popularizing the country rock sound.

The album was ranked number 368 in the 2012 edition of Rolling Stone magazine's list of the 500 greatest albums of all time, and at number 207 in the 2020 reboot of the list. The single "Take It Easy" is part of the Rock and Roll Hall of Fame "500 Songs That Shaped Rock and Roll".