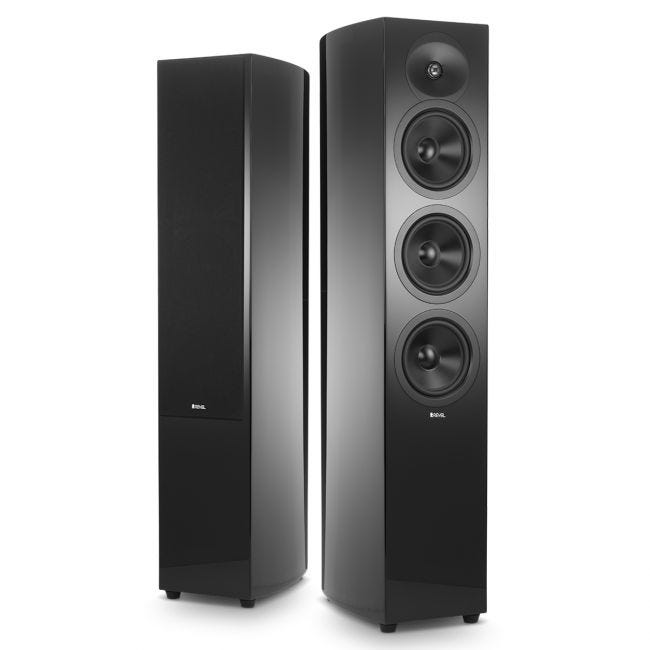 Be the first to review this product
SKU
F35.con
On request
From $2,995

"A hugely likeable and rhythmical pair of floorstanders, the F35s deliver a superb performance"

Learn more about the technology present in the Concerta2 speakers in Revel's White Paper (PDF, 0.3MB)

The Revel Concerta2 series of loudspeakers combines elegant design and superb finish quality with the best-in-class sound quality for which Revel is revered. Revel created the Concerta2 Series without sacrificing sound quality, beautiful design, or construction quality to meet lower price points. Instead, Revel engineers used the results of years of research to create superior waveguides, optimized transducers, new crossover topologies and novel port designs. These ingenious advances allowed Revel to create a series of loudspeakers that truly live up to the unmatched sound quality for which Revel is known.

These fabulous speakers are real entertainers

"It’s impressive how effortless the Revels sound. They dispatch any genre you throw their way with minimal fuss, but that doesn’t come at the expense of excitement. The F35s never sound disinterested or aloof, displaying more than enough enthusiasm to give the track impetus.

There aren’t many speakers at this price that make listening to music as enjoyable as the Revel Concerta2 F35s. It’s a rare talent, and one that goes a long way to landing these floorstanders the full five-stars."

The Concerta2 Series floorstanding loudspeakers have a woofer-midrange that reproduces the full low-frequency range in conjunction with two dedicated woofers. This architecture greatly increases the cone surface area, resulting in a remarkable system sensitivity of over 90dB. These towers are therefore an ideal match for a wide range of amplifiers, including very modestly-powered receivers.

Revel’s unparalleled research teams have discovered that far off-axis sound that is reflected from side walls is interpreted by our brains in combination with the direct sound from the loudspeaker to the listener—we do not differentiate between the two. This important advance in psychoacoustic knowledge means that the far off-axis response is just as important as the direct sound, and is, therefore, an important part of every Revel design. Our sophisticated high frequency “waveguides” match the off-axis response or directivity of the tweeter and the midrange throughout the crossover region. Double-blind listening tests have revealed the importance of this refinement—making the difference between what is clearly a “mechanical reproduction” and the seamless sound of real music. 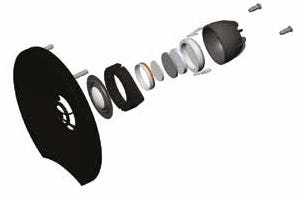 The superb high-frequency response is supported by the 1-inch aluminium dome tweeters that were derived from Revel’s Performa3 series.

Typical tweeter magnetic assemblies have a small space behind the dome that causes a high mechanical resonance. In designing the Concerta2 series, this challenge was met head-on by Revel engineers. They created a tweeter mechanical resonance that is well below the operating band which would ensure linearity and consistency at the crossover frequency. To do so, a large cavity behind the magnetic assembly is vented around the perimeter. This, along with a compliant diaphragm surround, sets the mechanical resonance frequency to a low 800 Hz compared to a typical 1.5 kHz found in similarly priced speakers. These advances allowed the tweeter/midrange crossover to be set an octave lower thereby improving the system directivity. 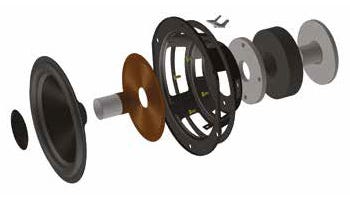 Revel Concerta2 crossover networks feature carefully-selected components that contribute to great performance and benchmark-setting value. These high-order crossover networks dramatically reduce distortion and dynamic compression for clear sound that maintains the same quality over a very wide dynamic range. These precision networks optimize the speakers’ timbral accuracy, enhancing musical enjoyment for listeners who are anywhere in the room, not only those seated on-axis to the loudspeakers.

A novel technique of cabinet construction was used to create Concerta2 enclosures that were not only beautiful but also have the rigid, curved side walls plus extensive bracing that results in a strong and inert enclosure. This ensures no cabinet colouration to the sound.

As they designed the patented waveguide, Revel sacrificed no details by making sure no fasteners were visible allowing the speaker to show enhancing smooth lines of the cabinet and magnetically attached grilles. To finish the enclosure, Revel selected high gloss black and white finishes to highlight the features of these beautiful speakers.

The Concerta2 series uses a patented Constant Pressure Gradient (CPG) technology in the port design. These new ports are designed such that the inner wall of the port is contoured, allowing the change in pressure along the axis of the port from inlet to outlet duct to be kept substantially constant. This design reduces the compression, or change in sound at different volumes that result from other port designs, and optimizes both the output capability and distortion.

A Clear Winner of Blind Tests

During development, every Revel loudspeaker model is compared head-to-head with competitive models in the world’s only position-independent, double-blind listening facility. True research-quality processes assure the validity of the listening tests, which employ the latest psychoacoustic research. All Revel Concerta2 loudspeakers are proven to be superior to their market competitors before they go into production.

About the Concerta2 Series

When the time approached to revamp the Concerta line and develop the Concerta2 series, there were several challenges to overcome. The series had to be a distinct sonic improvement over the previous Concerta series, it had to be visually stunning with a more modern design and finally, it had to maintain a popular price point. These challenges were faced head-on and subsequently overcome by the Revel development team.

Significant advancements in loudspeaker measuring and optimization, cabinet construction, crossover techniques, port technology, along with the resources and support from HARMAN allowed these goals to be met. Over two years of uncompromising development has produced the Concerta2 series: the F36 and F35 floor-standing loudspeakers, the M16 bookshelf loudspeaker, the C25 centre channel loudspeaker, the S15 surround speaker and the B10 subwoofer.

Revel was launched in 1996 with one goal, to create the world’s finest loudspeakers. To accomplish such a goal, the resources and expertise of Harman International were put to the task. Parameters such as cost and off-the-shelf parts were eliminated from the equation. Left were world-leading research and the freedom to craft loudspeakers utilizing science while maintaining sonic integrity.