Custom made premium Reference EBLT drive belt. Fitted as standard to all Planar 8 and Planar 10 turntable models from March 8th 2021.

The Rega Reference EBLT drive belt is the culmination of many years of R&D and advanced tooling trials. The most accurate drive belt Rega has ever produced, the Reference EBLT is now fitted as standard to all Planar 8 and Planar 10 turntable models as standard. The Reference belt is suitable for all Rega turntables but highly recommended for the Planar 6 and any Planar 3 using the Rega Neo TT PSU.

Each belt is moulded on our highly accurate custom tooling using a unique secret blend. Once moulded, the belts are cryogenically frozen and barrelled to remove any excess flash in order to create perfect cross-sectional roundness which is critical for accurate speed and stability. In normal use and conditions, the lifespan of the EBLT drive belt is 50% longer than the previous model. All Reference belts go through a unique curing process that guarantees the highest achievable level of accuracy.

Why Replace Your Drive Belt?

As drive belts wear & tear over time, they stretch and degrade in quality. This results in decreased pitch accuracy and performance. Rega recommends changing the drive belt every five years to ensure optimum performance.

Below you can see a direct comparison taken from Rega's custom test software. You can compare the old belt (top) versus the latest EBLT reference belt (bottom). In this test, Rega used the same Planar 1 turntable. The only part that has changed is the drive belt. You can clearly see a notable reduction in weighted peak Wow / Flutter measurements produced by the increased accuracy and cross-sectional roundness of the EBLT belt. The standard belt measures 0.253% / the Advanced EBLT measures 0.162% and the Reference EBLT measures 0.075% 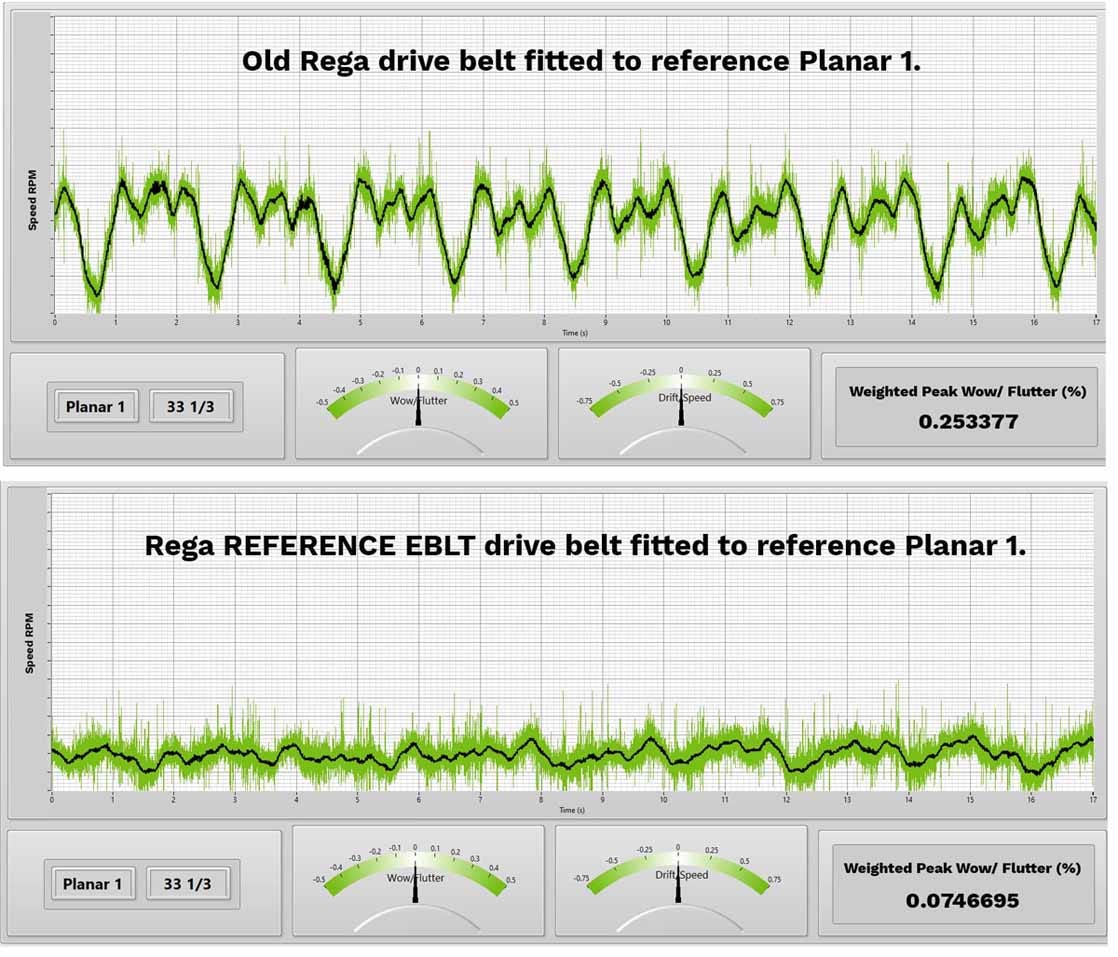 When is an ‘O’ ring not an ‘O’ ring? - The history of Rega drive belt design and development.

Rega has always championed the use of a circular drive belt and a ‘V’ shaped pulley as the optimum method of delivering energy from the turntable motor. However, achieving the accuracy required to transform this motor energy into accurate and stable rotational speed is not as straightforward as one might think.

In the 1970s the British standard tolerance for a rubber ‘o’ ring was a variation of 0.15mm in the cross-sectional diameter. Rega required more than ten times this level of accuracy, (ie a variation of 0.0125mm) a tolerance unachievable with a standard moulded ‘o’ ring.

In usual Rega style, we searched for and found a specialist company that would supply us with extruded rubber. This gave us much smaller variations across the diameter and was considerably more suitable for use on a turntable. The downside was that each drive belt had to be cut at 45 degrees and carefully glued together by hand to make a working drive belt, this was a difficult process, produced many rejects and could be time consuming. In the early days this was a relatively small problem as Rega was only producing one hundred turntables per month.

However, by the second year of trading monthly production had tripled and making this many handmade drive belts became an onerous task. (A task that would often result in the operative requiring urgent assistance to prise their fingers apart thanks to the exceptionally fast curing time of cyanoacrylate adhesives)! It was clearly time to find a better solution to Rega’s drive belt supply requirements.

Our first contact was with Dunlop, then British owned, and fortunately for us they employed an intrigued salesman called Tony Anthony. Tony was happy to work with Rega to push the boundaries of what was currently possible in regard to improving drive belt accuracy.

Their first attempt at a moulded belt was slightly less accurate than the extruded handmade version however, production demand meant that they had to be used (a decision Roy Gandy was very uncomfortable making) and this discomfort motivated him to work even harder. After a couple of years and many trials we made experimental tools in batches of four and then selected the best one or two. At this time, we could only mould 1000 belts at a time from a single tool before wear made it unacceptable.

After a few years, Dunlop management became concerned that Tony Anthony was spending too much time on Rega (for what was a relatively small production) and ordered him to stop supplying us. Roy wrote a (rare) pleading letter outlining that Rega could source better drive belts from a company in Japan who specialised in highly accurate drive belts for cassette players but stressed he really wanted to continue working with a skilled UK supplier. This letter got a surprising response! Roy was informed that some shop floor workers at Dunlop had been held in Japanese prisoner of war camps and did not like the idea of this job heading to Japan. The management changed their minds and continued to work and develop with us for some years until ironically, they were eventually bought out by a Japanese company. The new owners immediately stopped production of the Rega drive belt!

Rega then found an English company with a technical director who had experienced making drive belts for the small UK cassette industry and a whole new set of developments began. At this time higher quality tool steel became available and Rega discovered the cryogenic grinding process to remove flash. This yielded better quality belts and in much higher quantities, at least ten thousand belts could now be produced from a single tool before it began to wear.

Meanwhile, British engineering expertise was increasing dramatically. Partly due to the increase in foreign investment in UK car manufacturing, medical technology and the demands of the European aerospace industry. Rega benefited and found two new companies that had seen our exacting requirements as a challenge to improve their overall quality and ability.

Originally, these developments were intended for use only on models such as the Planar 8 and Planar 10 as the complexity and accuracy required for the tool making was so critical and expensive. However, the new manufacturers and a huge investment in tooling from Rega has allowed us to fit this latest belt technology to all models. (We recently worked out that Rega has spent more than £250,000 on drive belt tooling and development over a 45 year period)!

Over the past five years we have been experimenting with an innovative tooling company using CNC technology to make tools that have finally given us drive belts with an accuracy measured in just 1 or 2 microns. The use of advanced polymer materials (our top-secret blend) allows exceptional and ‘even’ elasticity over the entire length of the new EBLT and Reference drive belt. The result is clear, looking at the speed irregularity measurement figure of our entry level Planar 1 turntable (commonly known as wow and flutter) with the latest drive belt fitted this figure is instantly halved by simply fitting the new belt.

An unexpected development from all of this (something that often happens when you put maximum effort into any project) is that one of the three suppliers has developed their own advanced polymer curing process and have combined this with our most accurate selected tools. This has created a new reference belt that will be fitted as standard to all Planar 8 and Planar 10 models.

Rega will always push the boundaries in all aspects of engineering and we will continue to develop new tools and materials in the pursuit of greater musical accuracy. Nothing can ever be perfect but improving even micron accuracy and elasticity variations will always deliver a better musical experience from the humble drive belt.

So, when is an ‘O’ ring not an ‘O’ ring? When it is an advanced Rega turntable drive belt!

Write Your Own Review
3 Years
Rega products include a 3 Year Australian warranty covering parts and labour and a lifetime warranty against manufacturing defects.

How much does delivery cost?
We offer free post on all orders over $29 to anywhere within the Australian mainland and Tasmania.