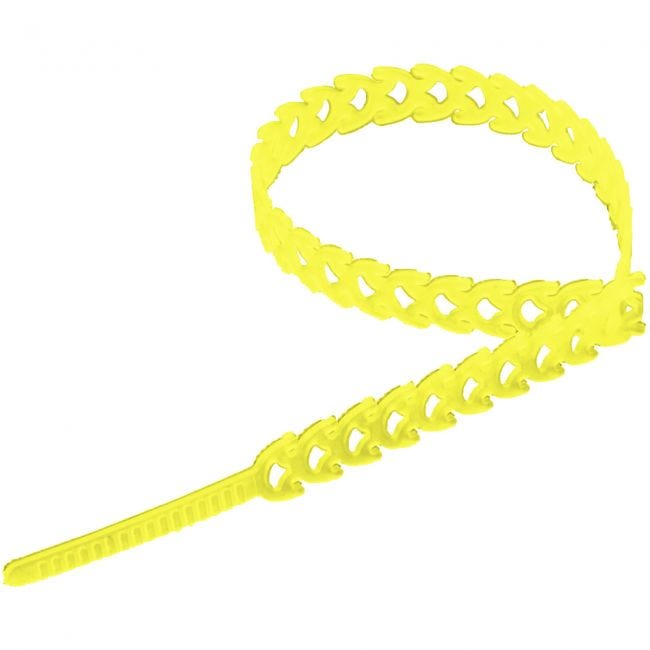 The Rapstrap is a new way to quickly tie up just about anything. 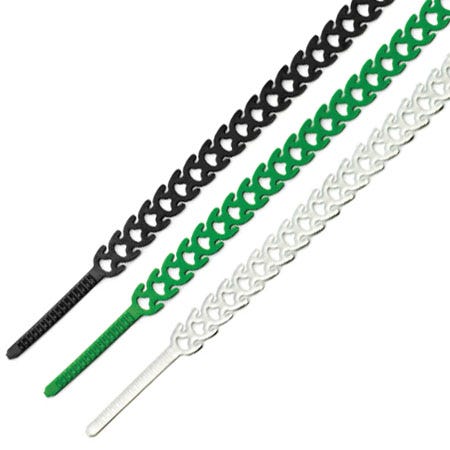 Rapstrap's innovative design combines a clever shape with a custom polymer to produce an incredibly versatile fastener. In use, Rapstrap is a softer and more flexible alternative to traditional cable and wire ties, and unlike its predecessors, it's a lot more efficient. When you cut the end off a Rapstrap, you can use it again and again, getting several ties from just one strap.

The Rapstrap is suitable for most everyday jobs. They serve as a suitable replacement for conventional cable ties in most applications, where the 300mm length allows several uses (on average providing up to five ties per Rapstrap), thereby dramatically reducing waste.

These Rapstraps will stretch to accommodate larger bindings and can be tensioned by pulling them as tight as required. As with all Rapstraps, they can be removed and reused if required.

The humble nylon cable tie has been around since the 1950s, and hasn't changed much during that time.

Often the first choice for most applications is a nylon cable tie. They're not ideal, they damage cables, they leave sharp edges, and a lot of plastic gets wasted. In many cases, up to 80% of the tie ends up as landfill.

This British company has developed the Rapstrap as a more efficient alternative. Now when you cut the end off, you just use it again! Made from elasticated polyurethane, a single 300mm Rapstrap typically replaces up to 5 standard ties, greatly reducing waste and lowering costs. It's soft, flexible and extremely versatile, it won't pinch or crimp like nylon ties can, and it's flexible enough to be used on plants or other delicate installations. It's an innovation long overdue.

Use it again and again

The Rapstrap's cellular tie strip can loop and weave into a multitude of different configurations.

This "self-terminating" system means that the Rapstrap gets progressively used up from the back, whilst the front end (with the tongue still attached) is kept and used again. Rapstrap is supplied in convenient tear-off sheets of 6. To remove a Rapstrap for use, simply tear down quickly from the tongue end and start tying!

Rapstrap derives its superior performance from a combination of the special shape of the cells, and the strong and flexible qualities of the polyurethane from which the Rapstraps are made. This patented design is a clever piece of engineering which allows the cells to deform during use, and this in turn allows one portion of the tie strip to pass through another.

The cells do this by folding along their spine, which makes them narrower and able to pass through one another. As each cell in turn gets pulled through, it automatically changes shape and glides through to form a loop in the Rapstrap.

However, when pulled backwards, this folding process occurs in the opposite direction, and this makes the cell's horns stick out. In this configuration they snare the outer cell and so lock the tie in place. This prevents the tie from coming undone.

How to fit and remove

It is not immediately obvious how to best use a Rapstrap, and a common mistake is threading the tongue through an inappropriate cell.

To fully exploit Rapstrap's usefulness, it is important to always thread through a cell at the end of the strip. This maximises the loop size, which will automatically adjust to the correct diameter as the Rapstrap is pulled tight.

Then simply cut-off any remaining Rapstrap (the front portion), and use it again. Note how the unused front section has become a new Rapstrap, and can be used again. If you continue like this, a standard 300mm Rapstrap will typically yield up to 5 ties, with minimum wastage.