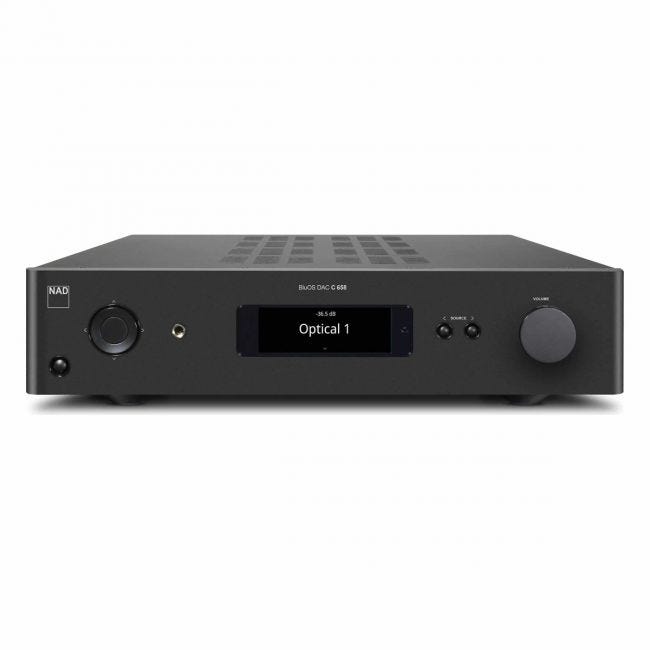 By combining High-Res streaming, analogue audio, and advanced room correction in one compact and affordable component, NAD has redefined the way we can enjoy music in the home today. Just add amplification and speakers, or self-powered speakers, to enjoy all your music from any source, and with BluOS, in every room of your home. The C 658 supports Wi-Fi 5, Gigabit Ethernet, and Bluetooth aptX™ HD and can both receive Bluetooth from a phone or computer and also send any source via Bluetooth to wireless headphones. And when something new ultimately comes along, the C 658 is ready to be upgraded, either via software or by adding a new MDC Module thanks to NAD’s Modular Design Construction.

With the NAD C 658, advanced technology and human engineering are combined to make the home listening experience better than ever. 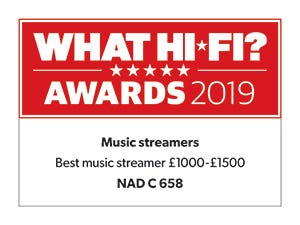 "The NAD C 658 is one of the most fully furnished, future-proofed and intuitive streamers we’ve come across – and at this price, one of the most convincing performers. It puts a big, bold tick in a great number of boxes. Nice work, NAD."
Read the full review on What Hi-Fi

The NAD C 658 is a new breed of stereo component that opens up a world of possibilities for audio reproduction. Combining a top-performing network streamer with a state-of-the-art DAC, the C 658 was designed for music lovers that want easy access to today’s various music sources. Featuring BluOS, Bluetooth aptX HD, Dirac Live Room Correction, and Modular Design Construction, the C 658 is a highly flexible unit that addresses the wants and needs of hi-fi enthusiasts at an affordable price. 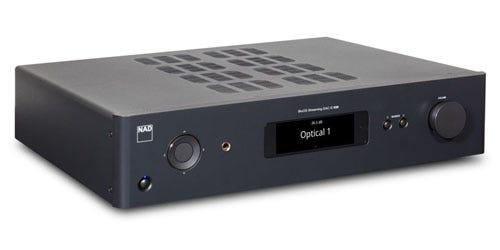 "NAD’s C 658 shows just how far network music players have come in such a short space of time. Five or so years ago, something as good as this would have cost at least twice as much. As well as being packed with useful features, it has a seriously enjoyable sound that’s hard to beat at this price, or no small amount more. Well worth auditioning, if you’re serious about streaming."
Read the full review on StereoNET

"A streamer, DAC and preamplifier combination, this NAD is a real Swiss Army knife of a hi-fi component. It uses Bluesound's BluOS streaming platform and app which brings access to Spotify, Amazon Music, Tidal, Deezer, Qobuz, HDTracks and more, as well as local and networked music. It supports files up to 32-bit/192kHz, including MQA, of which over 250,000 tracks can be indexed, and there's Bluetooth aptX HD and Apple AirPlay 2.
So how does it sound? Very good indeed. It's impressively expressive and really involves you in the music, while dynamics have a natural fluidity. As the hub of a system, it's all-encompassing.
All in all, it's one of the most fully furnished, future-proofed and intuitive streamers we’ve come across. First class."
Read the full What H-Fi? review

Redefining the Architecture of Hi-Fi Playback

As we move deeper into the 21st Century the way music is distributed and enjoyed continues to evolve away from physical media to streaming. It also has moved away from analog and more towards digital. The C 658 has incorporated these fundamental truths to create an entirely new type of component that combines a Network Streamer, a state-of-the-art DAC, and many aspects of the traditional Preamplifier into a single highly cost-effective package.

Thanks to NAD’s exclusive Modular Design Construction, it will keep pace with the latest technology not yet introduced, but inevitably coming in the future. In fact, an optional HDMI 4k switcher module is available now allowing the best sound from any of the many HDMI sources available (like game consoles and video STBs). While the C 658 immediately replaces (or adds) your Streamer, DAC, and Preamp, it also adds many new features you may not be aware of, like a Bluetooth aptX HD transmitter to use with your wireless headphones. The highly flexible outputs allow for a true balanced connection to powered speakers or amplifiers. Single-ended connections for amplifiers and subwoofers are also provided and include an adjustable subwoofer crossover executed perfectly in the digital domain. A highly sophisticated MM Phono input is also included along with line inputs for legacy analog components.

Also on board is BluOS, the most sophisticated High Res streaming system available. BluOS natively supports over 15 streaming music services and indexing of over 250,000 tracks from local network sources. The C 658 becomes a node in the BluOS ecosystem allowing high res network streaming to 64 zones and control options for iOS, Android, Windows, and Mac OS phones, tablets, and desktop devices. BluOS also supports all major smart home controllers and is available in a wide range of products making it easy to create a whole-house audio system with the C 658 at its heart.

Multi-room audio and smart home integration are made possible by the BluOS network streaming capability built into the C 658. This allows music to be available anywhere in the home by adding BluOS enabled speakers, either wired (64 rooms) or wireless (8 rooms) which can be grouped to play in unison or can be individually controlled to access network content. BluOS is the best sounding High-Res multi-room system available and is supported by several premium brands including Bluesound, Dali Loudspeakers, Roksan, and others to be announced.

The C 658 is part of NAD's Classic Series of components which have an enviable reputation for giving Music Lovers more enjoyment for less money. If you want a solid block of handcrafted aluminium with gold plated accents you’ll need to look elsewhere. If you want state-of-the-art performance and features in a sturdy no-nonsense package then you have the right address.

High Resolution in Every Detail

Most NAD components have been High Res for 45 years with very wide bandwidth, low distortion, and ultra-low noise. We just never had High Res source material to play. With High Res digital recording and streaming, combined with advanced technology like MQA, record companies are opening their vaults and releasing Studio Master Quality recordings. MQA decoding is available through BluOS Streaming content. The C 658 is pure High Res from input to output and features the ESS Sabre 32bit DAC, one of the best performing DACs on the market today with its 118dB Dynamic Range and incredibly low jitter spec. All preamp functions are executed in the digital domain including the same wide range non-truncating digital volume control used in the Masters Series components. This offers an incredibly short analog signal path that, rather uniquely, is identical for all volume settings. Sophisticated active power supplies provide super clean voltages to all circuits to keep noise and distortion at the edge of measurability.

The C 658 is also the first NAD stereo component to feature Dirac Live room correction, the most sophisticated and effective room correction available. Dirac corrects the impulse response of your speakers, in addition to the frequency response of your room, for a truly transparent window into the musical performance. When the room resonances are tamed and the transient response is corrected, the result is magical. You have never heard your speakers sound this invisible or this good!

Master Quality Authenticated (MQA) is a revolutionary end-to-end technology built into every BluOS Enabled amplifier to capture and deliver MQA music to your speakers in the purest quality. All BluOS Enabled players and systems include a powerful decoder and audio renderer for the millions of the MQA encoded songs, The MQA logo shown in the BluOS app indicates that the unit is decoding and playing an MQA stream or file, and lets you know that you are hearing exactly what the artist recorded and approved in the studio.

"The C 658 is a unique kind of component. In description for a product that includes functions previously requiring a CD player, a tuner, a DAC, an electronic crossover, and a preamp. In the end we decided to focus attention on the BluOS streaming and the high-quality DAC. But that’s only the beginning of the story. How did we fit unit and yet make it easy to access and control? The simple answer is ‘software,’ but the required software is amazingly complex and the result of many years of development combined with a high level of integration and cooperation with many very powerful iMX 6DL 1GHz ARM processor that can be programmed to perform many functions, which includes both a wired (Gigabit Ethernet) and wireless (Wi-Fi 5) interface to the internet. This is integrated with both analogue and digital hardware to allow the broad array of capabilities so neatly combined in a single component."

"We made the C 658 for serious music lovers that want access to all the various music sources available today while still honoring the legacy sources that are important to so many people. High-Res music streamed from the internet or stored on local memory media is the cutting edge of audio technology, but it is not the only way people consume music. LP records, CDs, MP3 files stored on phones, radio streams, and even music videos are all part of the mix for component that could be as universal as possible while extracting every last ounce of musical goodness from each of these sources."