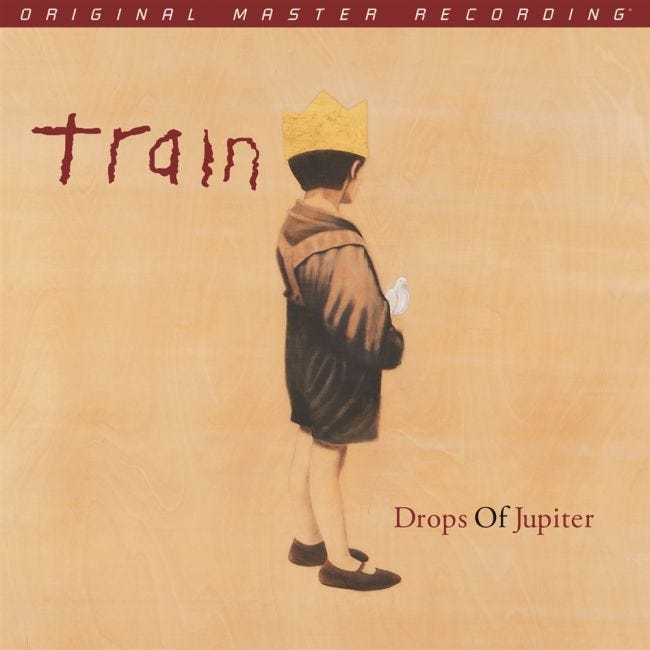 B1: Let It Roll
B2: Something More
B3: Whipping Boy
B4: Getaway
B5: Mississippi

Mastered from the Original Master Tapes, Pressed at RTI, and Limited to 3,000 Numbered Copies: Warm, Full Sound Breathes with Openness and Airiness

There's definitely nothing wrong with echoing classic rock and harmonic pop sounds, especially when it's done this well. Drops of Jupiter, Train's two-time Grammy-winning 2001 album, revels in sweeping hooks and soulful comfort borrowed from proven 70s methods. Remarks of jealous critics aside, the approach resonated with the public and made Train a ubiquitous presence of mainstream radio, a status the group still enjoys.

Mastered from the original master tapes, pressed at RTI, and limited to 3,000 numbered copies, Mobile Fidelity's 180g vinyl LP brings listeners much closer to the band's roots-rock instrumentation and vocalist Pat Monahan's smooth tonalities. Free of the harshness, boxiness, and flatness discernible on the CD, it breathes with an openness and airiness that grants the music translucent qualities. Previously restricted, dynamic headroom and instrumental separation are enlarged and enhanced. Suffice it to say that this modern classic has never sounded anywhere this good. It's a record made for experiencing in analog, and one timeless in construction and mood.

At its core, the San Francisco quintet's sophomore record is the sound of what happens when concerns about trends and coolness are put aside and solid, simple, genuinely earnest music is made the primary focus. Drawing from influences such as Elton John and Van Morrison, Train crafts eminently listenable fare steeped in finely tailored melodies and bolstered by affirmative, uplifting messages. Complementary accents in the form of sing-a-long refrains, folksy mandolins, and scene-setting synthesizer fills give songs grounding and fully realized depth. Time and again, the quintet's acoustic-based material satisfies and inspires.

Nowhere is this truer than on the soaring title track, a string- and piano-led orchestral ballad that remained in the Top 40 charts for an incredible 29 straight weeks. Nominated for five Grammy Awards, it won for Best Rock Song and Best Instrumental Arrangement Accompany Vocalist(s). Alternatively shimmering, endearing, and soothing, the rest of the Brendan O'Brien-produced album features the same consistency and passion throughout. Legendary pianist Chuck Leavell (Rolling Stones, Allman Brothers Band) and veteran Elton John arranger Paul Buckmaster also lend their hands, contributing to a set awash in anthemic persuasion and elegant grace.