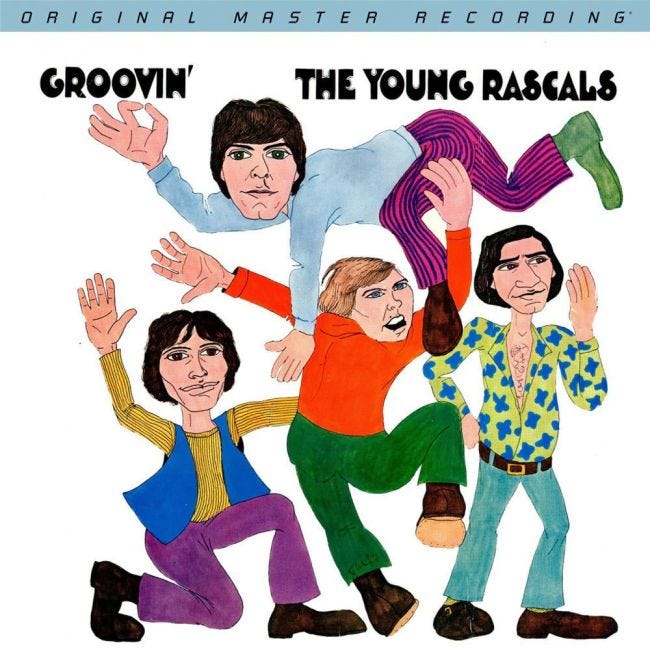 Simultaneously elevated and bypassed by the artistically prolific year in which it was released, the Young Rascals' Groovin' remains high-water mark of a collective Rolling Stone boldly proclaimed "the blackest white group of all" in 1970. Home to three Top 10 singles and a diverse array of pop music in step with the era's exploratory creativity, the set belongs aside the Beatles' Sgt. Peppers' Lonely Hearts Club Band, Love's Forever Changes, Jefferson Airplane's Surrealistic Pillow, and 1967's other pioneering recordings. Particularly now that it boasts definitive sonics.

Mobile Fidelity Sound Labs believes that mastering systems should be neutral and transparent. The essential idea is to unveil all the detailed musical information on the original master recording without adding deterioration, colouration or other sonic artefacts.

Numbered limited edition of 5,000 housed in a double-pocket gatefold cardboard jacket. This mono re-issue includes a bonus track of "A Beautiful Morning": Non-Album single released as The Rascals on Atlantic A-2493, March 1, 1968.

Mastered from the original master tapes and pressed on dead-quiet vinyl at RTI, Mobile Fidelity's numbered-edition 180g 45RPM 2LP of Groovin' presents the album in fully restored mono. In addition, the painstakingly produced restoration includes "A Beautiful Morning," an early 1968 million-selling hit that reached the third spot on the Billboard Hot 100 chart and debuted as the first release under the band's then-newly truncated Rascals name. Blue-eyed soul and innocuous optimism have rarely sounded more contagious than on this audiophile-grade reissue.

Expertly portraying the quartet's unmistakable harmonies, the reissue captures the deep-seated personality and effortless melodies that seemingly occupy every passage. Reflecting the playfulness of the cover art, the members demonstrate a cohesiveness, chemistry, and charm made vividly apparent via the newly uncovered detail, airiness, and tonalities. Benefiting from the focus, immersion, and accuracy unique to mono, and free of any artificial panning or effects, Mobile Fidelity's edition lets the songs breathe and expand. Notes blossom and decay, voices rise and fall, and the craftsmanship of the arrangements emerges with revealing clarity. Long overlooked due to the dozens of other landmarks issued in the pivotal year, Groovin' now firmly earns its place in history as a masterwork.

Look no further than the opening "A Girl Like You," commandeered by Felix Cavaliere's confident singing and skated along by peppy jazz-rock architecture marked by exuberant horns, lilting piano lines, and splashing rhythms. Or "How Can I Be Sure," on which Eddie Brigati takes the vocal lead over a waltzing pattern that conveys joyousness, rumination, and the rollercoaster ups/downs that accompany the initial stages of a relationship. Brigati also does the honours on the reflective, subdued, albeit optimistic Motown cover "A Place in the Sun," while he and Cavaliere share the lead on "If You Knew," a strolling ditty underlined by a subtle, swift bass line.

Of course, no piece on Groovin' remains more celebrated or recognized than the smash title track – part of the Rock and Roll Hall of Fame's collection of 500 Songs That Shaped Rock and Roll. As birds chirp and congas echo, the Young Rascals paint a picture of bliss, with R&B harmonies and a laidback harmonica whisking the listener to ecstasy. The original B-side, the Latin-inspired "Sueno," further puts the foursome's vocal aptitude on display. Sonically and lyrically ("I have been flying high above reality"; "Only thing needed is someone to come along and trip along with me"), it hints at the psychedelic experimentation the group would soon embrace to its detriment.

Indeed, Groovin' steers clear of any indulgence or falseness, wrapping its metaphorical arms around on the colours, moods, and possibilities of the age. Here, upbeat soul ("I'm So Happy Now") coexists with persuasive garage rock ("Find Somebody") and energized, fuzz-toned nuggets ("You Better Run") that prove the Young Rascals had their ears to the ground in both the States and England. In practically every way, it is thoroughly 1967 – and a quintessential part of any music library.