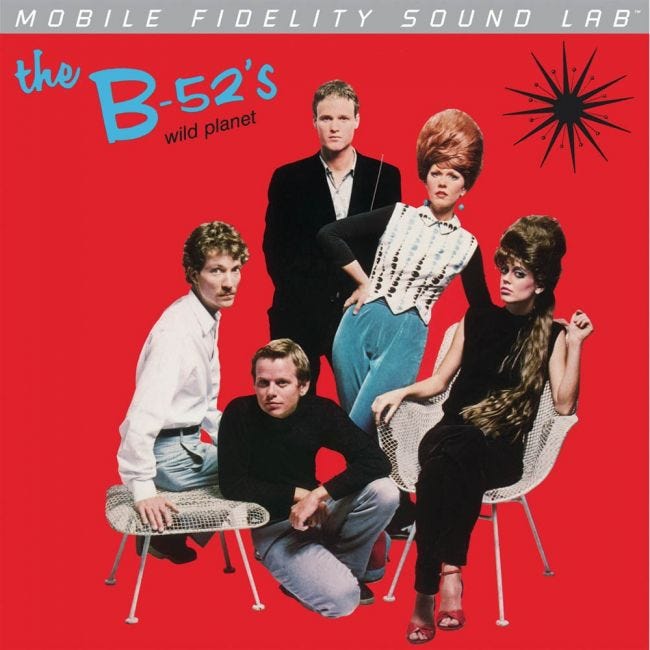 A1: Party Out Of Bounds
A2: Dirty Back Road
A3: Runnin' Around
A4: Give Me Back My Man
A5: Private Idaho

Party Out of Bounds! Eclectic Group's Sophomore Album the Equal of Its Smash Debut

Party out of bounds! Not only is this sentiment one of the B-52's directives on their ceaselessly fun sophomore album, it's one of the record's hit songs, and perfectly summarises the spirit and intent behind this new-wave classic. Completely up to task in following up their kitschy debut, the B-52's step everything up a notch: Songwriting, humour, exaggeration, melodies, hooks, and group interplay. Wild Planet also finds the band embracing stronger psychedelic accents that seamlessly mesh with its lava-lamp colours and textures. What an album.

Rollicking, rousing, and riotous, Wild Planet soars on vocal efforts put forth by the delightfully campy chanteuses Cindy Wilson and Kate Pierson, whose innocent girly tonalities wonderfully match up with Fred Schneider's effeminate deliveries and manic presentations. While the sheer exuberance and giddy nature of the music tends to make them an afterthought, the trio's harmonies are utterly amazing. Add in Ricky Wilson's propulsive beach-bound guitar riffs, random squealing synthesizers, and a surfeit of danceable rhythms, and you have nothing less than a 1980s masterpiece that, due to its optimistic vibes and buoyant grooves, only gets better with time.

As for clever humour and quirky character? Everywhere. Mentions of an icebox, fruit punch, and surprise greetings kick off the defining "Party Out of Bounds." "Private Idaho" is an instant mix-tape essential, sent up with declamatory refrains and insouciant beats. Not to be outdone, the B-52's tackle the subject of devilish possession on the witty "Devil In My Car" and get hysterical on "Strobe Light," surely the finest tune ever written about making love in the shadow of a pulsating illumination device. Schneider is on fire, embracing his sexuality while pushing his mates to new limits. There's no serious matter here; Wild Planet is all about celebrating, and few records do a better job of capturing such a mood.

Mastered on our world-renowned mastering system and pressed at RTI, Silver Label's numbered edition LP presents the B-52's 1980 classic in a rousing fidelity that will have you wanting to jump off your furniture, lampshade on head. The all-important bass lines, divergent vocal timbres, and usually unnoticed guitar lines attain an unprecedented level of balance and realism. And, few bands took advantage of the large-format LP cover art like the B-52's. The cover portrait of these fashionistas is reason enough to get these extraordinary reissue, which takes great pride in reproducing the original art right down to the last smears of eyeliner on Pierson and Wilson's faces.

Produced by Rhett Davies, The B-52's