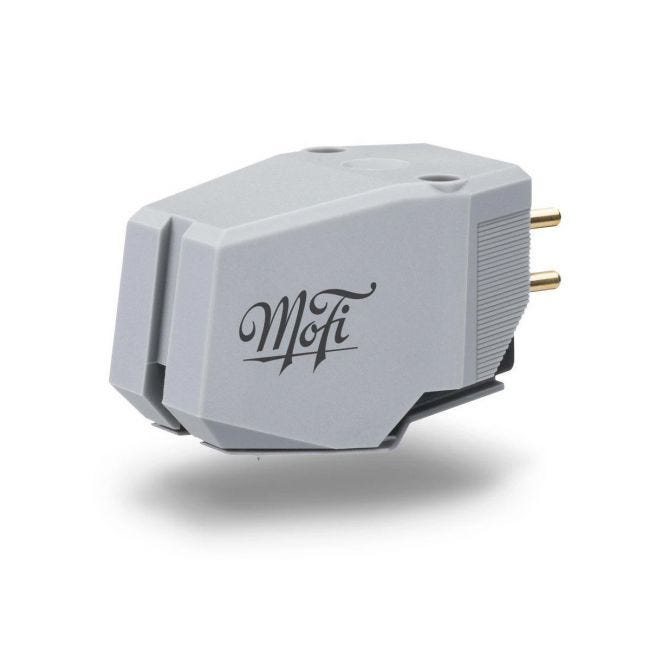 MoFi cartridges are designed by looking back at where a record starts: On a lacquer cutting lathe like the model used at Mobile Fidelity Sound Lab. StudioTracker features a V-Twin dual-magnet generator that mirrors the layout of the cutting head that originally made a record’s grooves.

Employing two low-mass, powerful magnets aligned in a V formation parallel with the stereo record grooves, StudioTracker accurately extracts all the precious details from your LPs. With a polymer body and elliptical stylus, StudioTracker offers surprising bang-for-your-buck value and a rich sound distinguished with a smooth, slightly forgiving top end.

StudioTracker's elliptical stylus allows it to dig deep into record grooves to extract the hidden cues located within, all without adding colouration. A proprietary material is applied inside the specially designed polymer headshell to maximize performance. The exciting result: An entry-level high-end cartridge on par with much more expensive models – and an instrument that achieves wondrous channel separation, detail retrieval, and dynamic responsiveness.

Mobile Fidelity's high-output StudioTracker MM phono cartridge takes its design philosophy from the label that makes the world's finest recordings. Mobile Fidelity has been true to the sound of the original master tape for the last five decades. It only follows that the Japan-made StudioTracker adheres to the same studio-level approach. True to the source, it reproduces what's in records' grooves: nothing more, nothing less. Distinguished with an extremely well-balanced frequency response and accurate dynamic swings, StudioTracker delivers a level of precision unmatched at this price.

Indeed, StudioTracker's rich sonic character and smooth, highly accurate top end owe to the countless hours invested removing unwanted resonance and employing next-generation dampening elements to improve the sound. The overall design increases the control of the stylus/cantilever and generator, leading to heightened information retrieval and an extremely solidified bottom end. Developed to showcase the sound of Original Master Recordings, StudioTracker brings listeners closer to the artists' original intent at a cost almost anyone can afford.

Mobile Fidelity has been the undisputed leader in audiophile recordings since its inception in 1977. At its Sebastopol, California, mastering studio, Mobile Fidelity cuts records using only the original master tapes as source material. The company's faithfully reproduced Original Master Recordings bring you – the listener – closer to the absolute truth and emotion of the original performances of the finest records made by the likes of Bob Dylan, Miles Davis, Aretha Franklin, The Band, Grateful Dead, Santana, Bill Evans, Nirvana, and many other Hall of Fame artists. Experienced on vinyl LP, SACD, or 24k gold CD, Mobile Fidelity software unveils all the detailed information on original master recordings without adding colouration or other artifacts. Drawing on four decades of engineering and studio experience, we have taken the next logical step: Applying our expertise, talent, passion to audio components. Every Mobile Fidelity product is made to meet the strict standards long synonymous with Mobile Fidelity's music releases.

Prestige doesn't come easy – or cheap. To meet all its specific needs and demands, Mobile Fidelity established a new, dedicated facility in Michigan to build the majority of its products in the USA. While an uncommon and expensive endeavour in today's audio industry, in-house manufacturing is the only way to maintain total quality control and create products that live up to the exacting standards Mobile Fidelity established over the past four decades with music releases. The approach cuts both ways, giving you the security and confidence that the Mobile Fidelity product(s) you own is built to – and built to perform at – the highest specifications.

Write Your Own Review
90 Days
This MoFi Electronics cartridge includes a 90-day warranty.