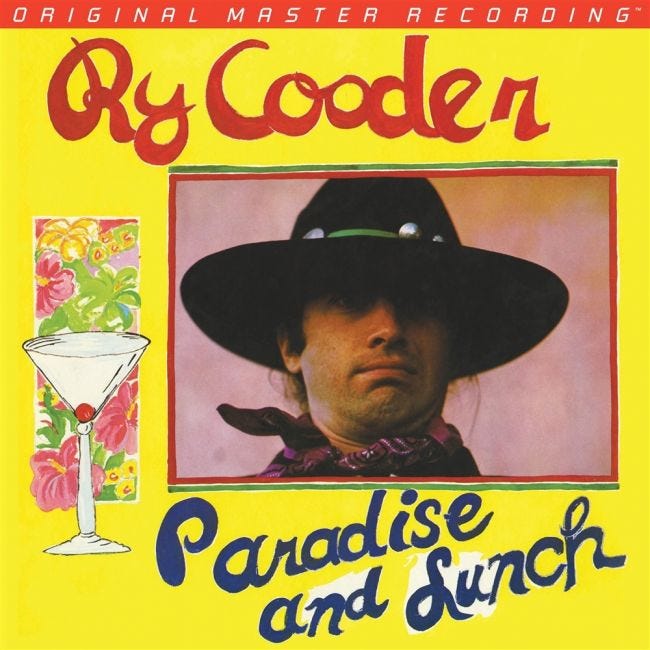 B1: I'm A Fool For A Cigarette / Feelin' Good
B2: If Walls Could Talk
B3: Mexican Divorce
B4: Ditty Wa Ditty

Diverse 1974 Set Comes on Like a Secret History of Song, Features Exquisite Interplay and Inspirational Harmonies.

Ry Cooder's exceptional Paradise and Lunch takes a popular precept - music as the common denominator across all languages and styles - to extremes few artists have envisioned let alone fulfilled. Considered by many diehards to be the California native's finest hour, the 1974 set unfurls with rarified levels of joyousness, ingenuity, and sophistication. A prime contender for any Desert Island list and an album that repeatedly restores your faith in the inimitable effects experienced upon listening to special performances, Paradise and Lunch is an eternal "musicians' musician" record - an adventurous, ambitious, soulful leap down roads well-travelled and paths less known.

Such eclecticism, virtuosity, and ebullience resonate with unmatched verve on Mobile Fidelity's 180g LP reissue. Mastered from the original master tapes, pressed at RTI, and strictly limited to 3000 numbered copies, this vinyl LP boasts dead-quiet surfaces, superb transient response, front-to-back soundstaging, and an organic immediacy that heightens the enjoyment, character, and craft of the arrangements. Cooder's inspired guitar playing sounds tremendously lifelike, replete with proper scale, full-bodied tones, and a sense of decay that presents the trail ends of each note. Horns pop with three-dimensional detail and brassy colors. Akin to the contributions of all the all-star participants, Jim Keltner's percussion benefits from added stability and depth. Paradise and Lunch has never been more transparent.

On the surface a collection of seemingly disparate jazz, blues, spiritual, and roots songs, the diversified album comes across as a secret history of music. It remains a paragon of seamless convergence in which sonic DNA differences reveal shared traits and quilt a fabric united by feeling, reinvention, and elation. Beginning with a recast rendition of a traditional folk number, "Tamp 'Em Up Solid," believed to be a close descendant of the group-vocal tune sung by field hands when they stacked bales of cotton, and ending with a stirring stripped-down cover of Arthur Blake's "Ditty Wah Ditty" - a show-stealing duet sent up with just an acoustic guitar and jazz icon Earl "Fatha" Hines' spritely walking-the-line piano riffs - Paradise and Lunch charms with exquisite interplay, inspirational harmonies, and innate flair.

At no point do the experimentations sound forced, artificial, or retro. Cooder transforms what initially appear to be obscurities into coherent, approachable songs that could have been recorded yesterday - or decades ago. In his world, a marvellous reggae-spiced and R&B-driven rendition of Bobby Womack's "It's All Over Now" coexists with a sanctified, harmony-based march through the gospel hymn "Jesus on the Mainline" anchored by restrained Dixieland accents and tolling bells. Another standard, albeit more modern, Burt Bacharach's "Mexican Divorce" strolls across dusty plains via gently clopping beats, shimmering Spanish motifs, and sympathetic support vocals.

Cooder also turns up the electricity a smidge for his idea of Bobby Miller's "If Walls Could Talk," a melodic snapshot of doo-wop shot through with reverb-drenched grooves. He rains funky vibes, chicken-scratch slide guitar, and churchgoing lessons down on a top-to-bottom remake of Blind Willie McTell's "Married Man's a Fool," the revision evocative of the imagination, proficiency, and blending that help make Paradise and Lunch an absolute must-own album - and now, an audiophile choice for those wished-for Desert Island trips.