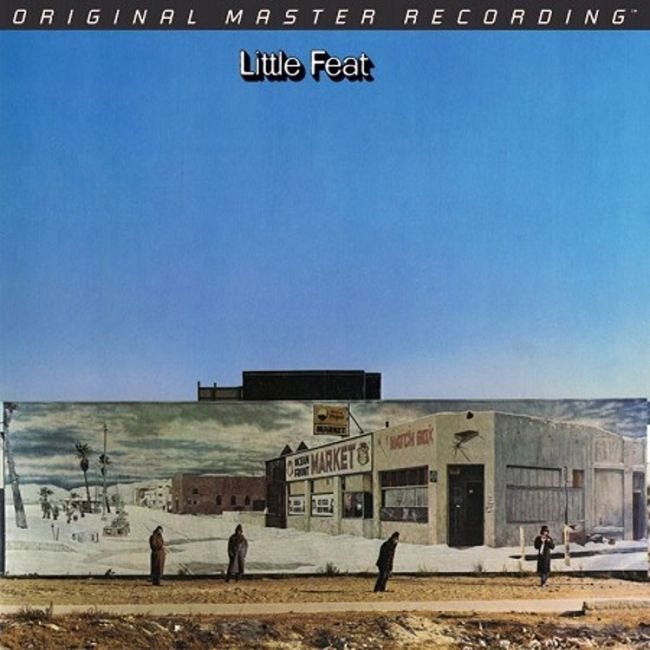 A1: Snakes On Everything
A2: Strawberry Flats
A3: Truck Stop Girl
A4: Brides Of Jesus
A5: Willin'
A6: Hamburger Midnight

B1: Forty Four Blues/How Many More Years
B2: Crack In Your Door
B3: I've Been The One
B4: Takin' My Time
B5: Crazy Captain Gunboat Willie

Little Feat introduced Southern-fried accents and funny personality sketches to the West Coast's country-rock template on its self-titled 1971 debut that remains singular in its aural and narrative visions of America.

Just as iconic illustrator Robert Crumb's characters evoke weirdly sympathetic figures, so too do vocalist/guitarist Lowell George's cartoonish character-driven narratives. His tales seem to come from a dusty, long-lost comic book – or a secret history of American culture that's a helluva lot more exciting, fun, and authentic than most anything you've heard. Liberating, freewheeling, and lined with subtle streaks of dark humour, Little Feat is the musical companion to Easy Rider. And now, it has widescreen sonics to match. Sourced from the original analog master tapes, Mobile Fidelity's 180-gram LP of Little Feat is more raw, bluesy, immediate, and open than any previous version.