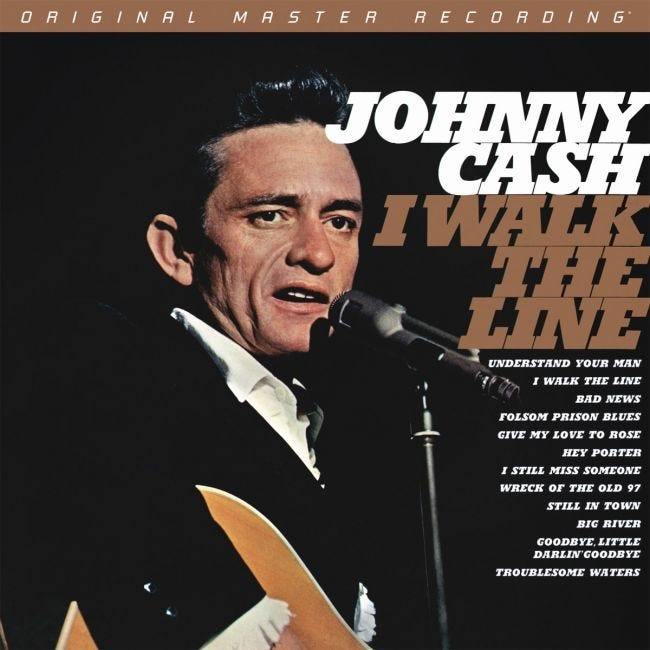 B1: Give My Love to Rose
B2: Hey Porter
B3: I Still Miss Someone

Mastered from the Original Master Tapes and Limited to 3,000 Numbered Copies: Presented in True-to-the-Original Mono

Originally released in 1964 on Columbia, produced by fellow Country Music Hall of Fame inductee Don Law, and featuring note-for-note re-recordings of several staples Johnny Cash made for Sun Records – including the title track, "Hey Porter," and "Big River" – as well as several new originals, I Walk the Line cemented the singer's place as the leading country artist of the era. Indeed, as the original liner notes state, "I Walk the Line offers Johnny Cash, renowned storyteller-in-song, at his creative and performing best."

Now, for the first time in more than five decades, you can experience it in true-to-the-source mono courtesy of Mobile Fidelity's meticulously restored reissue. Mastered from the original mono master tapes, pressed at RTI, and limited to 3,000 numbered copies, the audiophile label's 180g 45RPM 2LP set broadcasts the inimitable sonics of the Man in Black's cut-from-bedrock baritone, earnest acoustic strumming, and hand-in-glove band with utmost clarity, directness, and realism.

Much has been rightly made about the sparse, deceivingly simple boom-chicka-boom sound of Cash's righthand men, otherwise known as the Tennessee Three: bassist Marshall Grant, guitarist Luther Perkins, and drummer W.S. "Fluke" Holland. On this collectible edition of I Walk the Line, the trio's steady, fundamental rhythms and fresh, driving beats resonate with a presence, solidity, and immediacy unavailable on any other Cash recording. Such are the advantages associated with going back to mono, which gets right to the core of the rough-and-tumble country tenor of songs such as "Folsom Prison Blues" and "I Walk the Line."

There's a profound release of more textures, embedded details, and lively cohesiveness, with the group enmeshed with rather than separated from Cash's vocals. Key instrumental and vocal contributions from the likes of the Carter Family, steel guitarist Don Helms, pianist Floyd Cramer, and trumpeters Bill McElhiney and Karl Garvin (the same duo who played the signature Mexican-inspired brass refrain on "Ring of Fire") also come to the fore, no longer buried or artificially panned in the false stereo mix. Mobile Fidelity's I Walk the Line epitomizes the classic Cash sound and approach, through and through.

As for the music, it remains infallible. While the Sun material may be redone, the inspired performances equal those of the originals and, in some cases, like the fresh arrangement of "Wreck of the Old 97," improve upon them. And that says nothing of the new songs, most notably, the now-legendary "Understand Your Man," a humorous takedown that thematically and melodically references soon-to-be Cash collaborator Bob Dylan and his "Don't Think Twice, It's Alright." The tune hit Number One on the Billboard Country charts and stayed there for six weeks.

Coupled with other new fare (e.g., the sly "Bad News" and gospel-bent closer "Troublesome Waters") and his ensemble's chemistry and in-the-moment enthusiasm, a byproduct of the momentum that witnessed the singer/guitarist and company attain crossover fame, and the reprised music helps make I Walk the Line a benchmark Columbia set – and a Cash milestone.