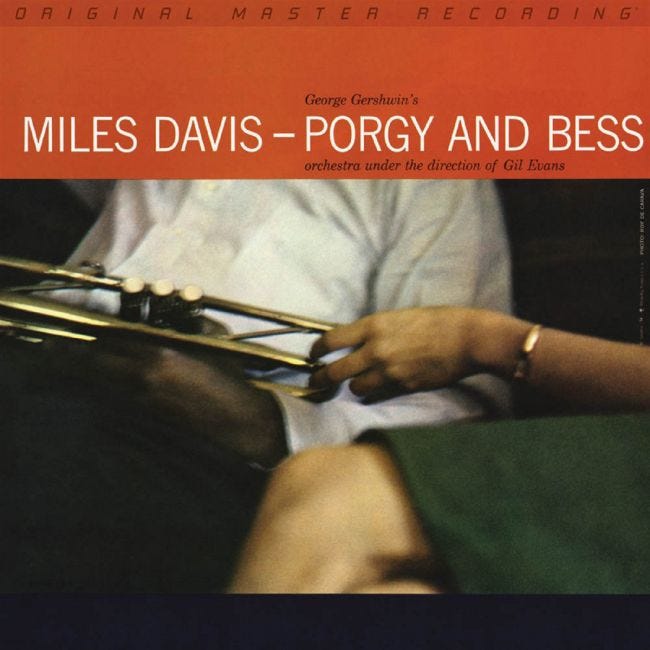 Mastered from the Original Master Tapes, Pressed at RTI, and Strictly Limited to 4,000 Numbered Copies

If a more significant, influential, and lasting result of a creative musical partnership exists than that of Miles Davis and Gil Evans' Porgy and Bess, society hasn't seen it. It's impossible to overstate the importance of the pair's collaboration on the landmark 1959 update of George Gershwin's opera. Transcending genre, time, and place, the profound statement finds Evans and Davis implementing modal approaches in a mainstream context and advancing jazz idioms that would become the foundation of the form's still-classic era. And that's saying nothing of the soulful playing – legendary performances by Davis' first great quintet that can now be heard in pristine detail courtesy of this definitive analog edition.

Mastered from the original tapes, pressed at RTI, and strictly limited to 4,000 numbered copies, Porgy and Bess attains previously unheard degrees of clarity, openness, immediacy, and depth on Mobile Fidelity's 180g 45RPM 2LP set. Here, the arrangements unfold amidst practically limitless soundstages and burst with multi-dimensional images. Separation between instruments allows you to locate individual band members and trace the decay of the notes. Davis' iconic solo passages take on borderline-surreal qualities of realism and shape. The magisterial scope of the Evans-conducted orchestra emerges with room-filling bloom, color, and dynamics.

While difficult to pinpoint its single-best strength, Mobile Fidelity's reissue gives reference-level credence to what may remain the album's most crucial aspect: tone. Based not on chords but on scales and feeling, Porgy and Bess teems with emotions and possibilities – characteristics conveyed by the nuances, timbre, and temper delivered by the array of horns, woodwinds, basses, and percussion involved. Whether the combination of Bill Barber's tuba in unison with Paul Chambers' bass during "Buzzard Song," Davis' improvisational flights on "It Ain't Necessarily So," or the doubling up on alto flutes on several compositions, never before have they been experienced with such richness, roundness, and palpability.

Just as identifying singular sonic highlights proves virtually unfeasible, so does underlining which songs feature the most memorable exchanges, melodies, and scoring. Davis and Evans' adaptation of Porgy and Bess remains of a piece, an American touchstone, a recording that immediately separated itself from the multiple other versions released during the same period and continues to make waves decades after its creation, assuming a place in the historical canon alongside collaborative masterworks by Duke Ellington/Billy Strayhorn and Frank Sinatra/Nelson Riddle.

Defined by Davis biographer Jack Chambers as "a new score, with its own integrity, order, and action," Porgy and Bess has been identified by nearly every major outlet and expert as a must-have album. Davis' phrasing alone cements the effort with a genius quality. As Brian Cook and Richard Morton explain in The Penguin Guide to Jazz: "'Prayer' is an astounding tour de force, harmonically suspended, and with Miles' most extraordinarily recorded solo to date punctuated by agonized screams and shouts, whether of affirmation or suffering it isn't easy to judge. Miles was not in good physical condition during the making of the record, which perhaps explains the twisting intensity, the bent notes and slurs which seem to express some inner pain." Then there's the immortal rendition of "Summertime," the epitome of calm, understatement, and beauty.

At once sweet and spiritual, sure and steady, graceful and exuberant, happy and poignant, Porgy and Bess is a phenomenal jazz dance that has never been equaled – and likely, never will. Hear it as Davis, Evans, and company intended.