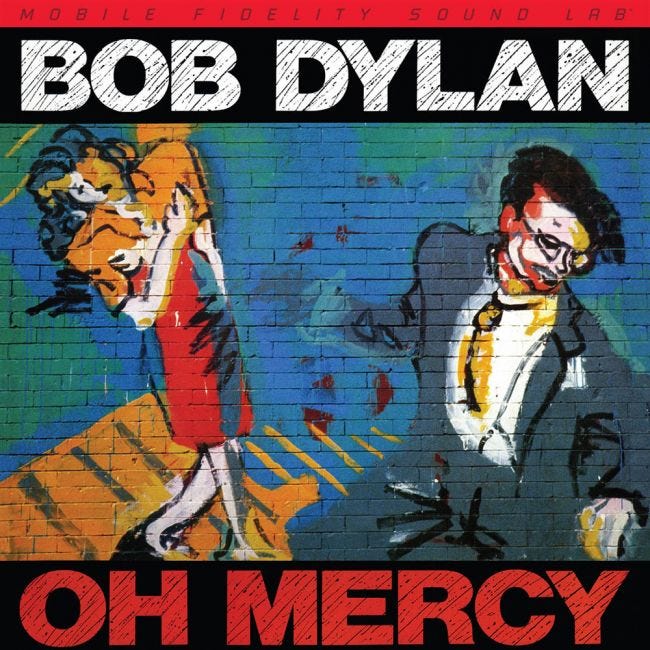 A1: Political World
A2: Where Teardrops Fall
A3: Everything Is Broken

B1: Ring Them Bells
B2: Man In The Long Black Coat
B3: Most Of The Time

D1: What Was It You Wanted
D2: Shooting Star

As soon as it was issued, Bob Dylan's Oh Mercy was rightly regarded as a striking return to form. The 1989 set also won acclaim for the singer's decision to pair with visionary producer Daniel Lanois, whose sonic guidance draws vivid colors, hues, and warmth from the songs – all the while adding significant ambience, effect, and context. Removed from the circumstances of its original release, Oh Mercy has managed to both justify and transcend such praise. As time wears on, the record only gets better, with its razor-sharp songwriting and atmospheric soundscapes escalating to legendary proportions via Mobile Fidelity's definitive analog reissue.

Mastered on Mobile Fidelity's world-renowned mastering system, pressed at RTI, and limited to 4,000 numbered copies, Oh Mercy now takes on cinematic qualities worthy of Lanois' production and Dylan's performances. Available for the first time on audiophile vinyl, the music benefits from a spaciousness, tonality, and surrealism no prior edition delivers. The extra groove space, too, seemingly gives each note its own physical dimension, whereby the Oh Mercy simultaneously immerses and surrounds you. Its clarity, dynamics, and extension also reach new heights throughout – whether it's the low-end reach on the spiritual-minded "Ring Them Bells" or combination of guitar-chord treble and piano decay on "Disease of Conceit."

Achieving a cohesiveness and richness absent from Dylan's other 80s efforts, Oh Mercy further stands out for its on-the-floor immediacy and nuanced treatments. Gone are the slick, processed, "shoulder pad" synthetic backdrops Dylan employed on the preceding Empire Burlesque. Borrowing from approaches he used on U2's The Joshua Tree, Lanois serves rather than obscures Dylan's intent – enhancing the topicality of barbed fare like "Political World" and further charging the self-doubting emotions of quizzical compositions such as "What Good Am I?"

For all of Lanois' magic, it's impossible to overlook the brilliance of Dylan's lyrics – or timbre and commitment of his singing. Many tracks on Oh Mercy have become live staples and fan favorites, and for very good reason. The swampy, percussive-augmented "Everything Is Broken" finds Dylan at his most forthright and descriptive, with the metaphorical and direct account of estrangement, loss, and chaos applicable to any number of eras, situations, or regimes. Mystery, voodoo, and portent fill "Man in the Long Black Coat," appointed by Lanois with aptly spooky devices and designed by its architect to "make an attack on your most vulnerable spots."

Indeed, vulnerability peppers the second half of Oh Mercy, whether on the unrequited bite of "What Was It You Wanted" or the gentle, heartbreaking look-back ballad "Shooting Star." By extension, Dylan strips himself of any defense mechanisms on the romantic albeit somber "Most of the Time," which rates among the icon's moving creations and captures the memory-haunting aftermath of a dissolved relationship with a frankness, transparency, and self-knowingness few artists would dare commit to tape.

Conversations about how Oh Mercy compares to Dylan's classic 1960s output continue to this day and, if anything, have become deeper and more involved due to the record's still-growing strengths. That several outtakes – "Series of Dreams," "Dignity," and "Born in Time" among them – landed on subsequent Dylan records and are beloved by fans speak to Oh Mercy's lingering magnetism and power.