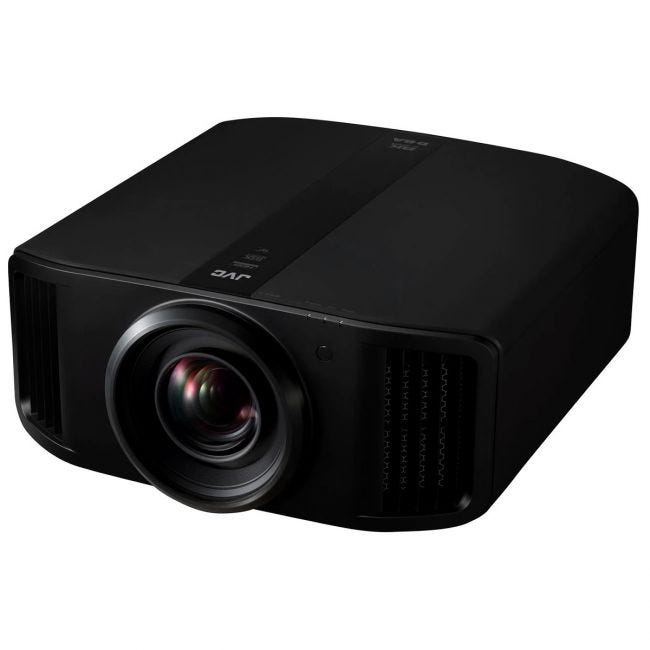 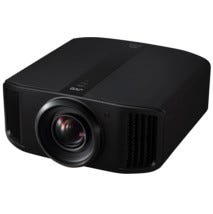 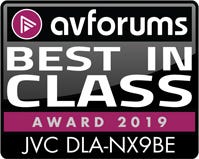 "This new flagship introduces a brand new projector chassis over the outgoing X-series e-shift 4K models, with a much larger case and huge lens assembly and opening."

"The NX9 is best in its class at this market point" 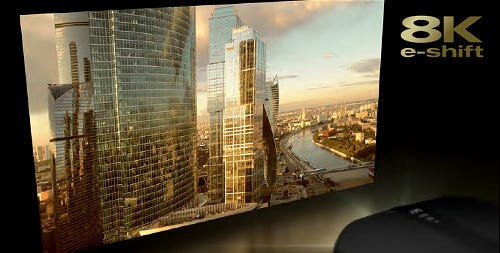 JVC's proprietary 'e-shift' technology is a high-resolution display technique that shifts each pixel by 0.5 pixels vertically & horizontally to achieve 4 times the pixel density of the original content.

JVCKENWOOD developed their 4K e-shift technology in 2011 and has been evolving it ever since. The 8K/e-shift technology adopted for the DLA-NX9B combines the 'e-shift' technology with another proprietary JVC innovation, Multi Pixel Control (MPC), to convert Full HD and 4K resolution images into 8K-equivalent resolution (8192 x 4320 pixels). The result is an eyeopening, ultra high-definition image that is crisp and vibrant. 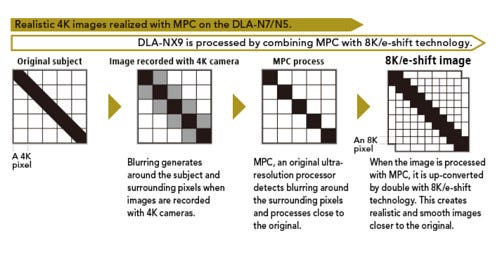 All JVC D-ILA projectors feature the proprietary high-performance image processing technology, Multi Pixel Control (MPC) that detects blurring present in images taken from 4K cameras. An original algorithm analyses and corrects the image. The MPC is capable of accurate reproduction closer to the original. Compared to conventional band processing, MPC achieves a far greater depth of clarity from the 4K image by detecting and processing images in a higher frequency range to achieve exceptional presence and bokeh, creating almost 3D feeling. Exclusively on the DLA-NX9B, the image processed with MPC is up-converted using 8K/e-shift technology to double the image information for displaying more realistic and smooth images closer to the original.

The Pixel Adjust function allows users to precisely correct colour deviation in 1/16-pixel increments. It is also capable of segmenting the entire screen into 121 points and adjusting them individually to realise clearer video without colour deviation. Two settings can be stored in memory. 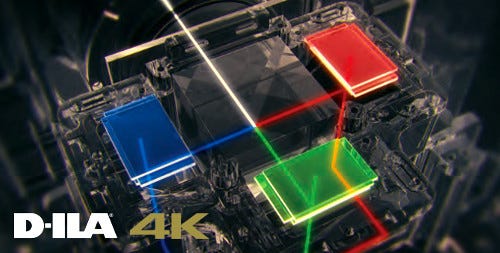 D-ILA projectors continue to evolve and the projection device is the heart of the projector. The DLA-NX9B features an original native 0.69" 4K D-ILA device, which has been improved with process refinements on planarization and reflection efficiency to achieve higher brightness & contrast. Additionally, a dedicated driver LSI was also enhanced to simultaneously drive each of the three (RGB) native 4K D-ILA devices at high-speed 120fps. This ultra high-speed driving is enabled by adopting the latest high bandwidth memory (HBM) technology and uses a silicon interposer to process a large amount of data. Furthermore, stable high-quality image projection can be achieved by equipping the new driver LSI with an original frame rate converter and various device correction functions. As a result, precise and smooth image projection unique to 4K native can be achieved with the combination of a new device and new driver LSI. 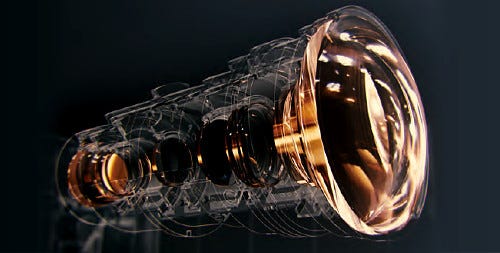 The DLA-NX9 is equipped with an 18-element, 16-group all-glass lens featuring a full aluminium lens barrel. In order to project high-resolution images to every corner of the screen with the 100 mm diameter lens offering wide lens shift of ±100% vertically and ±43% horizontally, the projector adopts five ED lenses that take into account differences in the RGB refractive index to reduce chromatic aberration and colour fringing when lens shift kicks in to deliver precise reproduction of 8K-resolution images.

Motion Enhance technology optimally controls the driving performance of D-ILA drives by image characteristics, the projector is capable of reproducing much smoother moving 4K images. The custom interpolation algorithm reduces ghosting and has been overhauled to improve compensation accuracy in the periphery of intersecting objects. The improved algorithm now refers to more frames to increase precision of motion prediction and also reduces frame latency. Additionally, when Clear Motion Drive is set to low, it recreates the natural 24fps signal processing adopted on films, while pursuing an effect like de-juddering without a sense of discomfort. 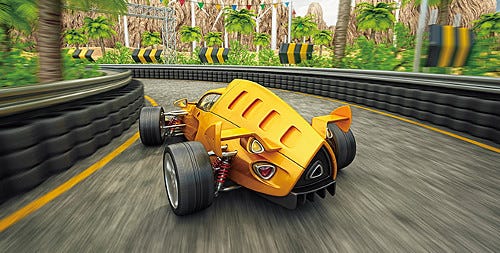 An increasing number of new generation game consoles capable of outputting high-spec 4K game images are now available, which leads to an increased demand among users who want to play 4K/HDR games on a BIG screen. The DLA-NX9 D-ILA projector features an improved Low Latency Mode that ensures faster response with PC and game console content.

HDR (High Dynamic Range) content contains more data including an extended brightness range, 10-bit gradation, and a wide BT.2020 colour gamut. To precisely reproduce this content, the DLA-NX9 has high-performance at its very core. With D-ILA projectors, HDR content is optimally reproduced with “high-brightness, high contrast, and wide gamut” to enjoy high-quality HDR content as you’ve never experienced in the past. Moreover, in addition to HDR10 content, which is found on UHD Blu-ray Discs, the projector automatically detects the Hybrid Log-Gamma (HLG) signal, a technology used widely in broadcasting, allowing the user to view it in an optimum picture mode. 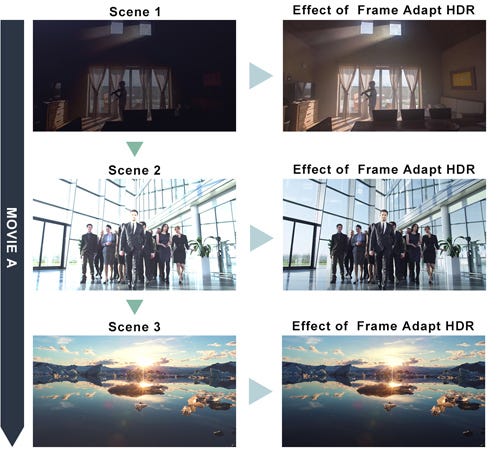 The JVC DLA-NX9 instantly analyzes the peak brightness for each scene and frame of content and automatically adjusts the dynamic range.

The high-end DLA-NX9 is accredited with THX 4K Display, which was established to ensure that the certified projectors will precisely reproduce picture quality in home environments for both 2K and 4K content, 'just as the original filmmaker envisioned'. Encompassing more than 400 laboratory tests to evaluate a projector’s colour accuracy, cross-talk, viewing angles and video processing, this certification helps to guarantee high-definition quality. Additionally, all models are licensed with the ISF C3 (Certified Calibration Controls) mode, enabling trained dealers to professionally calibrate them to desired screen surfaces, lighting environments and video sources, and then securely store these precise settings into the projector. 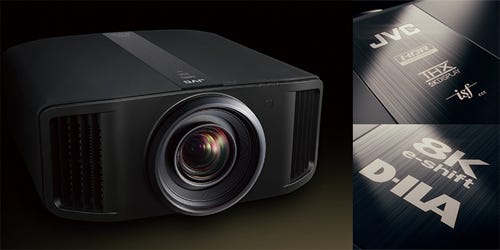 The JVC DLA-NX9 is equipped with "Installation Mode" that allows you to centrally manage settings related to installation in order to enjoy projected video best suited for your unique viewing environment. Nine settings for Lens Control, Pixel Adjustment, Mask, Anamorphic on or off, Screen Adjust, Installation Style, Keystone, Pincushion, and Aspect can be adjusted. Additionally, ten different mode settings can be stored in memory that can be named as desired and can be called up immediately.

"After 20 years of progress, the D-ILA projector evolves from 4K to 8K with JVC’s e-shift technology."