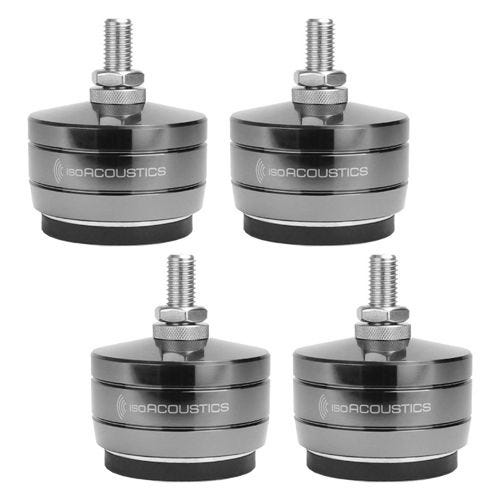 For premium high fidelity speakers. The GAIA Titan Theis 70 provides remarkable improvement in sound clarity and openness for a speaker weighing up to 145kg.

Key Features:
- Allows your heavy, high-end speakers to perform to their full potential
- Eliminates a major factor affecting speaker performance, the surface
- The soundstage blossoms to open up a three-dimensional image of natural, spatial sound.
- Optimised for larger floorstanding speakers weighing up to 145kg
- Three thread sizes included (M8-1.25, M14, and 1/2-13)
- 4 feet included. For a single speaker.
- Packaged in a luxurious presentation box "The GAIAs look superb – and what they’ll do to your music is magical."

An Isolation Solution for Your Speakers
The GAIA Titan Theis 70 model has been designed for a wide variety of floor standing speakers with a maximum weight of 145kg. To enable them to be compatible with a wide variety of floorstanding speakers, these isolators come with 3 common thread sizes which will fit most speakers of this size. Alternate sizes are available upon request.

Packaged in a luxurious case, it is clear that these isolating feet are more than just a cheap system tweak. For larger floor mount monitor systems, these high-quality isolators are widely considered a "required option". 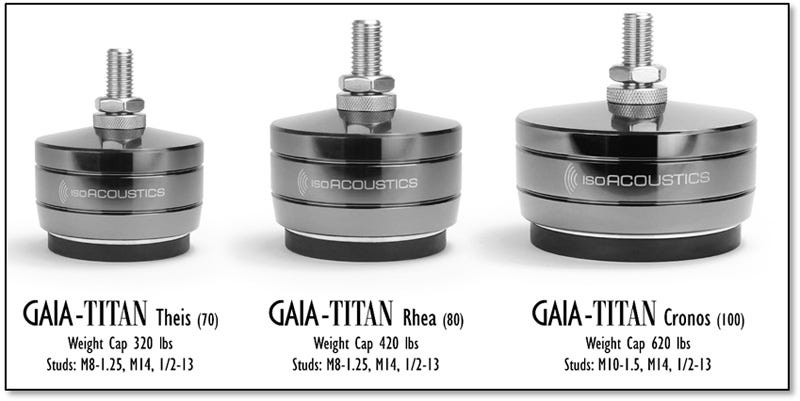 For floorstanding speakers that aren't too large or heavy, the GAIA range may be a suitable alternative.

The Art of Isolation
When a speaker is placed on a hard surface, secondary internal reflections result. Any artefacts of this smear that is similar in the two channels is perceived to be in the center, causing the soundstage to collapse. The GAIA series of isolators eliminates this smear resulting in a larger 3-dimensional soundstage.

The GAIA Titan isolators are machined stainless steel units that incorporate IsoAcoustics’ patented design to provide a high degree of speaker isolation, while resisting lateral movement and oscillations, to maintain accuracy and alignment with the listening position. Internal reflections from the hard supporting surface are attenuated resulting in greater sound clarity and openness.

The soundstage blossoms to open up a three-dimensional image of natural, spatial sound.

Carpeted Floor?
The GAIA Titan’s lower isolator is designed to adhere to the supporting surface. For carpeted flooring, Carpet Discs are available for each GAIA-Titan model which allow the GAIA’s to connect to the solid flooring below.

IsoAcoustics
IsoAcoustics is pushing the boundaries to optimise sound. You've already invested in a high-end system. Now there’s a sensible way to get the absolute best from your audio system with the clarity and openness of true and realistic sound.