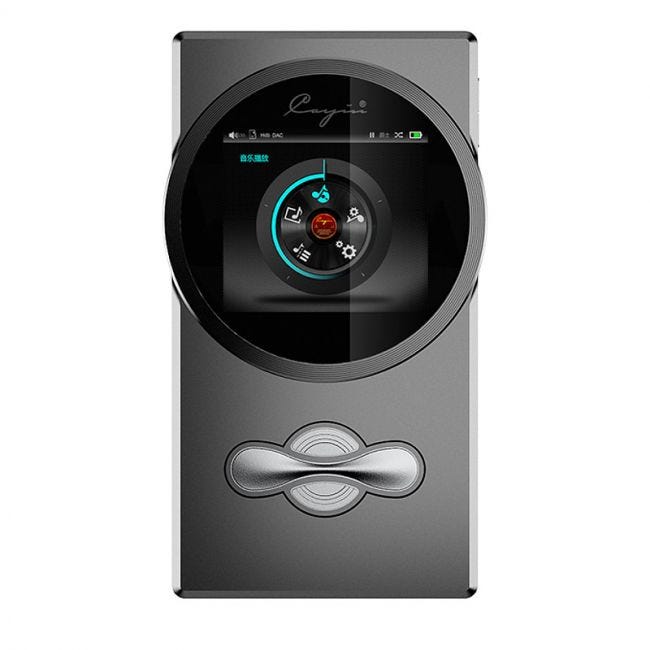 The high-resolution music player that looks like it's from the future. Because it is!

If you've invested in quality headphones, your iPod or smartphone isn't doing them justice. The Cayin N6 is the portable music player for people who really care about audio quality.

With 8GB of built-in storage, and expandable up to 200GB with MicroSD cards, this player can hold all your high-definition music. Compatible with a wide variety of high-resolution audio filetypes, including lossless formats (such as FLAC and WAV) that an iPod simply can't handle.

With a headphone output, a line output, & a digital coax output, you can hear your high resolution music through headphones or a Hi-Fi system!

Cayin N6 DSD Portable Lossless Music Player
The N6 from Cayin is the ultimate device for storing and listening to your digital music in the modern world.
Whether you're on the go or at rest, play the N6 through your headphones or home stereo setup to hear the difference in quality. It plays a wide variety of high-resolution audio files, including lossless formats (such as FLAC, OGG, and WAV) that an iPod or smartphone simply can't handle.

Headphone Amplifier
The N6 also operates as a headphone amplifier which provides enough power to drive your high-end headphones to the volume levels you desire.

USB DAC
Thanks to the USB DAC feature, the N6 can even function as an external sound card for your computer. This provides higher quality audio output than your standard headphone socket can provide.

Premium components are a key to the success of the N6, however that's not the whole story. Cayin has continued to design and engineer high quality audio products for more than 2 decades and their knowledge and experience is evident in their flagship N6 model.

What is DSD?
Direct Stream Digital audio is a high resolution audio format which has a sampling rate of 64 times that of a standard audio CD. This equates to a much higher level of sophistication and detail in the sound recording. Although previously only available using expensive studio equipment, native playback of the DSD format is now conveniently available in a handheld portable device!


Powerful DAC Function
The N6 can be used as a powerful DAC (Digital-to-Analog Converter) allowing you to achieve fantastic Hi-Fi quality sound when connected to a computer or laptop.

Impeccable Workmanship
The main chassis of the N6 is CNC machined out of a single piece of aerospace aluminium alloy over several hours. While providing a sleek finish the aluminium finish also acts to help disperse heat. The rear panel is made from carbon fibre and flush mounted to the aluminium chassis, creating a near seamless finish without showing assembly parts or screws.