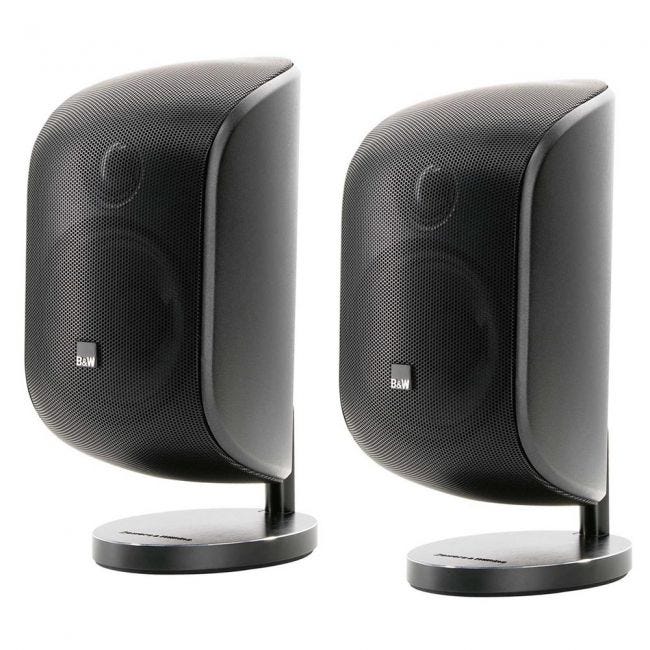 Be the first to review this product
SKU
M-1.pair

The most compact and versatile Bowers & Wilkins speaker, the sleek M-1 can be used alone, with a subwoofer in stereo, or in a 5.1-channel surround system. It can even be mounted on a wall.

Forming the basis of a completely revised Mini Theatre concept, the new M-1 combines a cleaner aesthetic with dramatically improved performance. Its extended bass response allows M-1 to be used on its own for two-channel applications. Mount the speaker as shown on a table or shelf.

Key Features:
- 2-way, full-range speakers
- Sound great in a pair or in a mini surround sound system
- Flip sideways to use as a centre speaker
- Nautilus™ tube loaded tweeter with aluminium dome
- Woven glass fibre cone bass/midrange
- Cable management through base
- Matte Black or White finish suits every space
- Can be positioned on a shelf, on the wall, or on its dedicated stand
- Table stand and wall bracket included
- Stand for the M-1 available separately

The sum of the parts

Sleek, compact, yet packing a powerful punch, the M-1 satellite speaker is the backbone of Bowers & Wilkins' Mini Theatre system, taking all five positions in a surround-sound set-up. From the inside out, the M-1 was conceived as a unified system. Its design has evolved in a totally integrated way, from the custom-made crossover to the two-piece clamshell cabinet.

And now, following a complete technological overhaul, including all-new drive units designed in-house, it sounds better than ever. Dispersion has increased. Imaging is pin-point accurate. Performance is now full range. In fact, the improvement is such that a single pair of M-1s could happily take on the role of your dedicated stereo speakers. It all adds up to stunning sound, whatever you’re listening to.

Designed to be heard, not seen

When you’re watching a movie, it’s what’s on the screen, not around it, that’s important. The M-1 doesn’t hog the limelight. Everything about its design, from its compact stature to its graceful curving edges, helps the speaker fit gracefully into the background and let the screen take centre stage.

But take a closer look at the M-1, and you’ll soon start to notice the design ingenuity and attention to detail that’s gone into making this speaker so discreet. The speaker’s versatility, for example, allows it to adapt perfectly to any home cinema environment, no matter how awkward the space. You can put the M-1 on a bookshelf. Or mount it on a wall. Or position it on its own floor stand (sold separately). It can even swivel to a horizontal position, for when you want to use one as a centre channel speaker. Available in a Matte Black finish, its clamshell cabinet is formed from just two interlocking, continuously curving sections. No hard lines to distract the eye.

The key to the M-1’s rock-solid sound is its unified, integrated structure: the way the design coalesces the components and cabinet into a harmonious whole. It all fits together beautifully, with a minimum of noise-inducing seams, joints and discontinuities. The result is a speaker that’s rigid, well-damped and air-tight.

In the same way a power cable enters a well-designed table lamp at its base and passes up through the stand, the M-1’s signal cable disappears into the back of the table plinth stand, from where the signal reaches the speaker via a specially-designed, pre-wired arm support.

The M-1’s tweeter is no off the peg model – it’s a highly specialised piece of equipment custom-made by the same designers and engineers who created some of Bowers & Wilkins' best-known hi-fi speakers, including the CM Series.

As well as featuring a unique surround material, the tweeter is tube-loaded, a design innovation Bowers & Wilkins first introduced on their groundbreaking Nautilus speaker. The tube works by soaking up unwanted resonance from the back of the tweeter, so the sound you hear from the front is as detailed and precise as possible.

Pair with the PV1D Sub

Combine the M-1 speaker with either the ASW608 or the new PV1D subwoofer to create a home theatre experience with superb integration and impressive power for such a discreet system.

In the best movies, everything fits. Actors, dialogue, storyline – it’s when all these separate elements merge effortlessly together that you know you’re in for a great cinematic experience. The same goes for Bowers & Wilkins' Mini Theatre series.

Tucked away on a bookshelf or mounted on stands, these are speakers designed to blend elegantly and unobtrusively into your surroundings. Thanks to some dramatic technological improvements, satellites, and subwoofers now integrate so seamlessly that each individual speaker seems to vanish, leaving you with the most immersive, fully formed cinema sound possible. No joins. No gaps. Just pure entertainment.