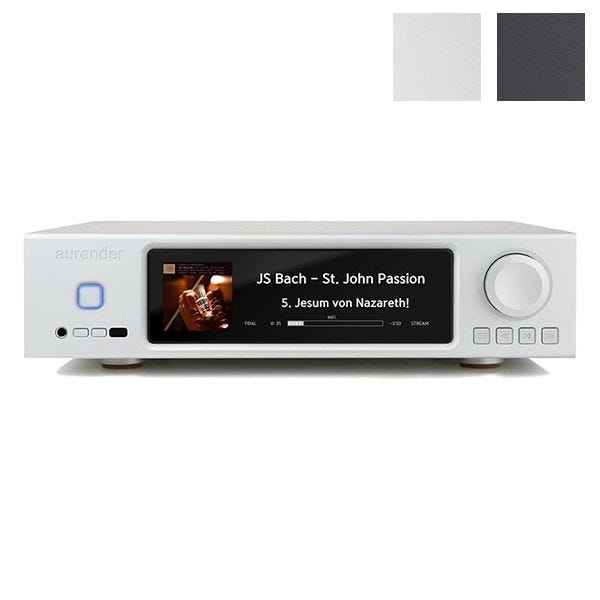 Be the first to review this product
SKU
A20.con
Call To Order
From $22,995
Notify me when this product is in stock

Redefining the Relationship between Digital Audio and Music. The A20 is the latest addition to Aurender’s range of analog output music players and shares the same basic circuitry topologies, DAC chipset and form factor as the flagship A30. Searching for a high-performance one-box source component? Look no further than the extraordinary A20 from Aurender. 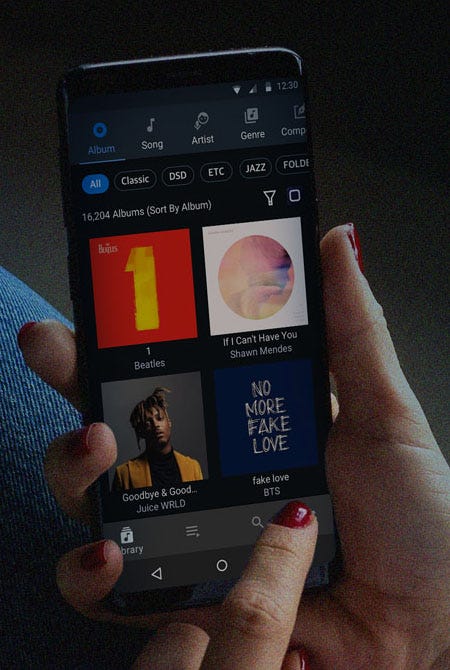 A20 is the latest addition to Aurender’s range of analog output music players. The A20, shares the same basic circuitry topologies, DAC chipset and form factor as the flagship A30. However, it dispenses with the CD ripping functionality, metadata editing software and the headphone connection provided is a single standard ¼” jack. By being scaled back, the A20 will appeal to the digital music lover whose library is already digitized and wants a full-fledged, high-performance server, streamer, preamplifier, DAC and headphone amplifier.

The A20 can be customized to your needs in terms of storage capacity and type. Two trays located on the rear panel each can accommodate a hard drive (HDD) or SSD. For users with large music collections, each tray could be fitted with an 8TB SSD providing a massive 16TB of digital file storage. Consequently, if the user is 100% streaming, no drives are required to be installed, but can be added later should you change your mind.

What distinguishes A20 from other analog output models is its pure audio performance. Employing the world-renown AKM 4497 chipset in a dual-mono with dual linear power supplies, you can expect nothing but the best in sound quality. Also included is full MQA Decoder technology which enables you to play back full-resolution MQA audio files and streams, delivering the highest possible sound quality of the original master recording.

Since many audiophiles will use the A20 as their “digital hub”, the ability to reduce system complexity is easily achieved. For example, the A20 can function as a preamplifier allowing for direct connection to a stereo power amplifier or active speaker system. The preamp section has both SPDIF and optical inputs that allow other source components like a CD transport, Blu-Ray player or cable box to feed its audio through the A20’s DAC improving fidelity. Lastly, the system volume can be controlled in three ways; the front panel rotary control, the Aurender Conductor app or using the supplied IR remote control.

Searching for a high-performance one-box source component? Look no further than the extraordinary A20 from Aurender.

Aurender engineered 768KHz/32bit dual-mono DAC designed around next generation flagship AKM 4497 DAC chipset with dual-mono linear power supplies delivers reference-class fidelity. Aurender designed the A20 for those seeking the simplicity of an all-in-one but unwilling to sacrifice a high level of resolution, transparency and the reproduction of inner detail. The Aurender A20 includes full MQA Decoder technology, which enables you to play back MQA audio files and streams, delivering the highest possible sound quality of the original master recording.

When A20 is used as a preamplifier, volume can be adjusted from three locations; the front panel rotary control, phone or tablet app and supplied IR remote control. When used with a preamplifier the variable output can be set to fixed direct output in settings.

Incorporated within the topology of the A20 is a high-quality headphone amplifier suitable for use with the finest headphones. A single ¼” jack is provided on the front panel for easy access.

A full-linear power supply and extensive shielding prevent noise from being delivered to sensitive DACs for the best sound reproduction. Four discrete toroidal transformers power the server system, digital output and dual DACs respectively. This power supply comes with a “super capacitor-based” uninterruptible power supply (UPS) for stabilizing the A20 under an abrupt power outage condition.

Support for All High-Resolution Formats

The A20 is capable of upsampling non-DSD files to 705.6/768kHz to the analog outputs. You can also choose PCM audio to reach the DAC without alteration and allow the DAC to perform its own upsampling.

The parameters of the digital and analog filters are able to be adjusted by the user for precisely fine tuning the sound to best compliment the audio system the A20 is used in. There is a factory default filter setting which can be selected. MQA content requires a filter setting that cannot be changed as it is a fixed for the MQA decoding process.

For best audio performance, circuitry related to panel illumination and other background function can be defeated. This mode conserves system resources for the best possible sound quality.

The App turns your iPad, iPhone, Android phone or tablet into a versatile user interface for all Aurender Music Server/Players. All settings and functions of the Aurender can be easily accessed through the Settings menu, and Aurender Conductor comes with extensive features to make managing, viewing and playing high-resolution music collections a breeze. The subscription streaming services TIDAL and Qobuz are embedded within Aurender Conductor and Spotify Connect and internet radio service as well as creating a seamless user experience. Merging streaming service content to your main file library provides easy access to all your favourite music and the ability to blend content when creating playlists.

A20 features a 2X isolated LAN port in which to connect directly to your router. This LAN port will isolate the A20 from any noise introduced by the LAN/Router connection.

Four digital inputs are provided: one RCA Coax, one BNC Coax and two Optical. These inputs allow for the interface of additional digital sources such as a CD transport, DVD player, television etc. Any device connected this way will now be able to take full advantage of the superior sound quality of the DAC within the A20.

A20 features two USB 3.0 ports either for super-fast copying from a USB storage device. 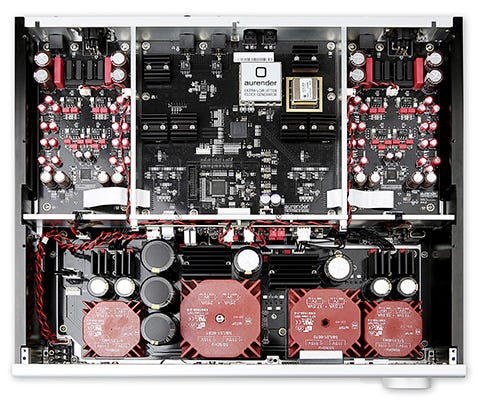 The A20 provides two user accessible ports on its rear panel that allow the user to install the type and capacity of hard drive that best meets their requirements. Most users opt for SSDs which are reliable, cost-effective and are available in 1TB, 2TB, 4TB and 8TB capacity. With the dual trays, it’s possible to fit the A20 with up to a mindboggling 16TB of SSD storage! If you’re a streaming enthusiast, then no drive(s) need to be fitted. But should your situation ever change you can install them at a later date and begin to collect and store hi-res file-based content.

When A20 is fitted with a storage hard drive or hard drives of the user’s choice, playback is handled via the unique to Aurender, caching system. While music files are stored on the user installed drives, playback always occurs from a solid-state drive (SSD). This method allows for the storage drives to only be concerned with loading content onto the SSD for playback. The result is that these drives experience a short duty cycle of operation before going idle contributing to their long- term reliability.

In the unlikely event you may need technical support, you can do so right from the Aurender Conductor App. Sending a Remote Support Request from Aurender's app allows their engineers to quickly diagnose and correct problems over the Internet, should they ever occur.

Aurender - The Future of Sound

Laptops and consumer-grade network products are a significant source of noise and jitter, and a high-quality streamer is potentially one of the biggest upgrades you can make in a digital system. Aurender designs its products with sonic quality first, using the best components, most efficient processing, high-quality clocks, and excellent isolation.

Through in-house engineering and manufacturing, Aurender makes the finest high-fidelity music servers and audio players on the market. Their design process starts with a blank sheet of paper. Everything from circuit design to industrial design is meticulously engineered with a focus on performance and build quality.

Aurender's hand-picked components have changed the game, standing head and shoulders above the rest of the field. 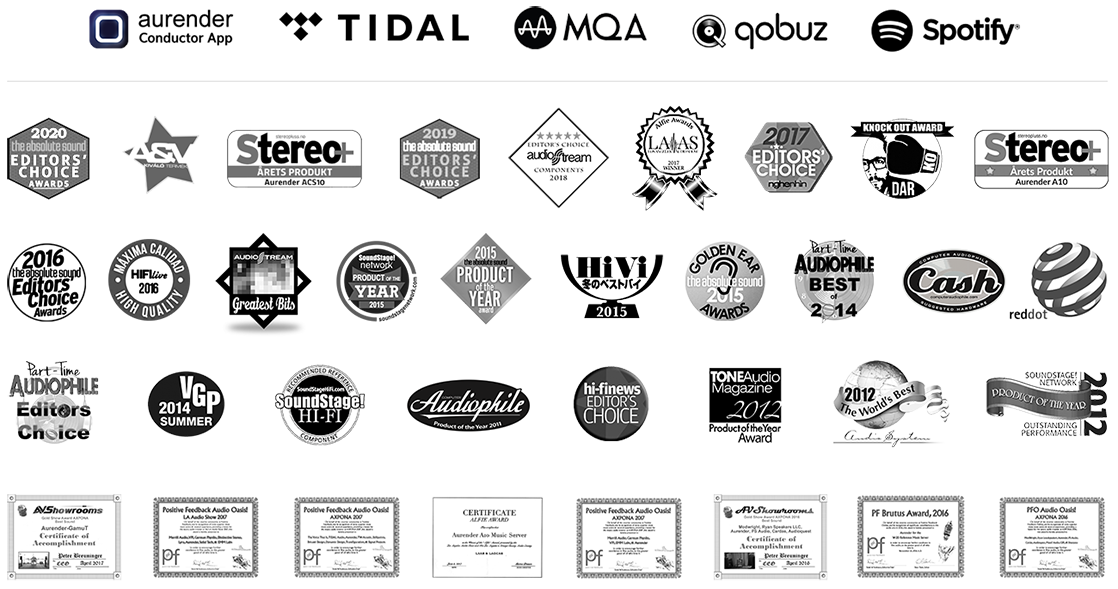 Write Your Own Review
3 Years
All Aurender products sold by us are supported by a 3-year warranty covering parts and labour within Australia.