What is a VESA mount pattern?

You’ve probably heard the term “VESA” before in regard to televisions, but perhaps its meaning has got you stumped! Introduced in 1997, the VESA mount interface, is a standard defined by the international standards body “Video Electronics Standards Association” for mounting flat panel monitors, TVs, and other displays, stands or wall mounts. It is common on most modern flat-panel monitors and TVs. The standard specifies wall mount screw hole spacing, screw hole depth and screw thread size. 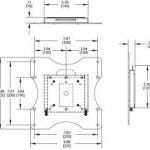 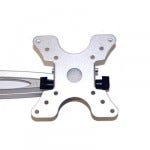 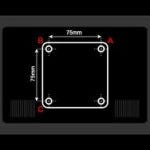 The VESA system provides consumers with a plan or pattern to adhere to, ensuring a match between the wall bracket/mount and their television.  Most sizes of VESA mounts have at least four screw-holes arranged in a square on the mount, with matching tapped holes on the TV or monitor. The horizontal and vertical distance between the screw centre was originally 100 mm. A 75 mm × 75 mm layout was defined for smaller displays. Later, variants were added for smaller screens and VESA mounts were extended again in 2006 with additional screw patterns that are more appropriate for larger TV screens taking the range to 7 standard sizes.

Many current wall brackets are now manufactured with multiple VESA patterns so they can accommodate a few different television/monitor sizes. Although most television manufacturers adhere to the standard, it is a good idea to check in your TV’s user guide to see if it is VESA compatible. Non-VESA compatible TVs can still be wall mounted, however you may find the range of brackets restricted. If you’re not sure of the VESA pattern on your TV, it’s pretty simple to work out by measuring the distance horizontally and vertically between the four mounting holes at the back of your television. There are also a very small percentage of TVs which do not have any mounting holes.

You will also need to know the weight of your television before purchasing your wall mount, because not only should the mounting pattern be compatible, but the mount will need to be rated to support the weight of your television. Considering that many of us are purchasing enormous televisions these days, you must check the manufacturer’s user manual to determine its’ accurate size and weight. Once armed with this information, you will find it easy to select a suitable wall bracket to do the job.

It’s also valuable to know that Plasma televisions run “hotter” than LCD or LED, and are heavier too. In this case, ensure you select a bracket or mount that can safely take the weight, and one that will give you a bit more breathing space behind the TV, to avoid overheating it.

If you would like help in determining the right mount for you, feel free to call one of our Selby Techs on 1800 69 2225