Projector Series: What is Contrast Ratio?

Contrast Ratio is an important figure to take into account when looking for your new projector. Along with the ANSI Lumens, the contrast of the picture is one of the more noticeable specifications.The ratio explains the level of intensity between the whitest white and the blackest black of the image. The figure represents some light output for white divided by some light output for black.

There are two common ways to measure contrast ratio, with each being just as important as the other.

The most commonly used method used is On/Off Contrast Method.

The second commonly used method is the ANSI Contrast Method.

ANSI (American National Standards Institute) Contrast measures the black and white levels by using a 4x4 black and white checkerboard pattern on the screen. The white output level is measured, then the black, using the same pattern. 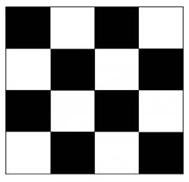 This method is used to evaluate how well the black is “held” in the presence of bright objects in the picture. Where on/off may show a high contrast ratio, the ANSI contrast will show how well the dark and bright objects will be seen at the same time. ANSI Contrast is also highly dependent on the amount and behaviour of the light in the room.

Essentially, the higher the contrast ratio, the more difference you will notice between the blacks and whites on your screen.