You hear the terms 3G and 4G often, especially when you’re on the look-out for a new mobile phone. It’s plastered all over the advertising material that every provider produces. It does make you wonder “Which one do I need?” and “Is the latest really the greatest?” To begin, it is helpful to understand that the “G” stands for generation. To date we have had 1G, which was the early analog mobile phones, followed by 2G, which was our leap into the digital world. Third-generation (3G) mobile phones were introduced into the US in 2003 and soon after into Australia. 3G included internet capabilities and was promised as a solution to “mobile internet” or “broadband” with a minimum consistent internet speed of 144Kbps (kilobytes per second). There has been quite a variation in delivery of these standards however, where carriers provide anywhere from 400Kbps to ten times this speed.

4G is the fourth generation of mobile telecommunication standards. A 4G system allows for mobile ultra-broadband internet access for laptops with USB wireless modems, smartphones, tablets and other mobile devices. Although the definition has changed over recent years, 4G offers a faster connection, and technically must offer at least 100 Mbps to be able to label itself 4G.

With each generation comes new and improved technologies. Larger capacity and potential for increased services sees service providers jostle to attract customers with these new offerings. With 5G on the horizon, is it worth waiting for the next generation? Opinion differs whether it is of any extra benefit to the average user, however for those who use their laptop or tablet via a mobile link to surf the Web or stream video, the extra speed and capabilities would certainly be noticeable. Until then, 4G will be the limit.

If you have a 3G phone and you've been frustrated with clogged-up networks, 4G may be the solution. You'll be switching to a different, less-trafficked network for your Internet data. Anecdotal evidence from users indicates that speed is much improved, however they also explain that download limits can be quickly reached and it does suck the battery dry much quicker for obvious reasons. 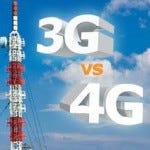 If you live in an area that doesn't have 4G coverage, there's no advantage to a 4G phone. In fact, you'll have serious battery life problems. If you do buy a 4G phone but cannot use the full 4G service in your area, make sure you disable 4G as the radio's search for a non-existent signal will drain your battery quickly.

It's going to be the case that there will always be a "better" version on the horizon as manufacturers bring out new features and capabilities on a regular basis. It's important to seek out further information from your provider whether the device and/or coverage will be suitable for your needs. You may find that device you're using actually performs better for you than the shiny new model just released.

Below, is some further technical detail to give you a comparison guide if you'd like to get into the nitty gritty.